In this fast-paced world, 60 years of doing anything continuously is noteworthy in and of itself. Not to get all existential right off the bat, but as finite creatures we really admire longevity, and we can’t deny that persistent question which follows it everywhere: “How did you do it?”

The illustrious Stereophile Magazine turned sixty years old this past month, which, coming from the publishing world myself many moons ago, I find simply incredible. Before it hits the press, each and every issue, no, check that– each and every article is a battle of the conveyance versus the retrieval of information, wrestling the two into a seamless one, by deadline. 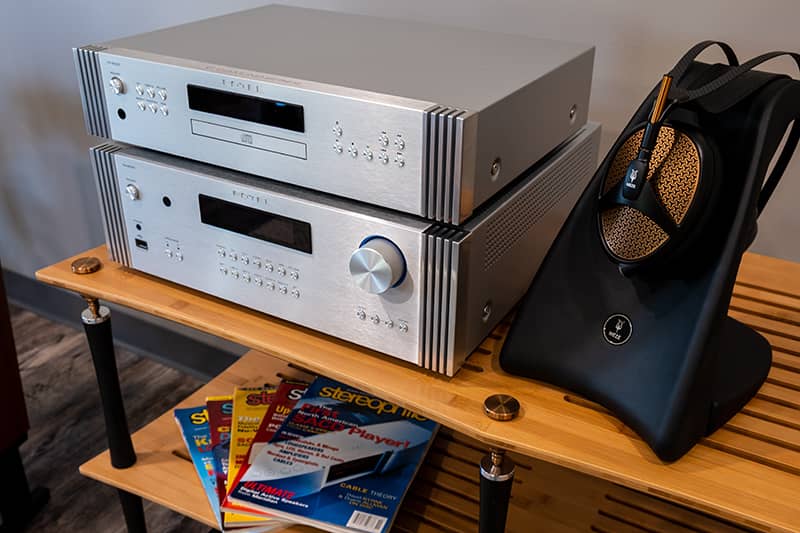 At the beginning of the latest issue, John Atkinson describes the scene in the early years of the HiFi mag founded by J. Gordon Holt in 1962. Atkinson lists some of the competitors and HiFi brands written about at the time, noting the precious few still in existence. Those remaining brands – B&O, McIntosh, Marantz, Nagra, Shure and others – have earned a special kind of respect from audiophiles, and all wear their decades of experience with pride.

One such HiFi brand was getting formed the year before Stereophile’s debut, and in 2021 quietly celebrated their own diamond anniversary. Family-owned and still keeping to the rigorous standards they set for themselves from the beginning, HiFi staple Rotel marked its 60th consecutive year during the height of the coronavirus pandemic, which is a bit of a shame.

We should have been able to join the party, or at least have a chance to hear the new anniversary products commemorating the milestone. But supply chain concerns and a lack of HiFi audio shows anywhere pushed back the timeline for us to be able to experience Rotel’s new Diamond series.

Well, here we are, at last, with a fresh new Rotel system to experience and enjoy. A year late, but better late than never. The company’s six decades of hard-earned skill and experience are said to be fully leveraged in these two pieces, and I cannot wait to hear the results.

Rotel on the mind

The Music Room recently became an authorized dealer for Rotel and Michi this year, the result of our long time experience with countless Rotel products. The brand makes equipment that sounds amazing and just doesn't quit, and in The Music Room’s blog we recently took a look at the company’s history and design philosophy.

Their “Balanced Design Concept” approach is one of the major things that sets Rotel apart year after year, and the blog is worth a read for any HiFi enthusiasts. This review’s focus however is squarely aimed at the newest, and as I came to understand, best products Rotel has ever made: the anniversary Diamond Series RA-6000 integrated amplifier and DT-6000 DAC/Transport.

Several publications have covered their release, but none have gone beyond the information from the original press release at the time of this writing, so I’m thrilled to offer something of a closeup look at the noteworthy newcomers.

The RA-6000 is a Class A/B integrated amplifier with up to 350 watts RMS into 4 ohms available, and the DT-6000 is a CD player and digital converter which uses all eight channels of its ESS Sabre 9028PRO chipset to feed its differentially balanced output stage. 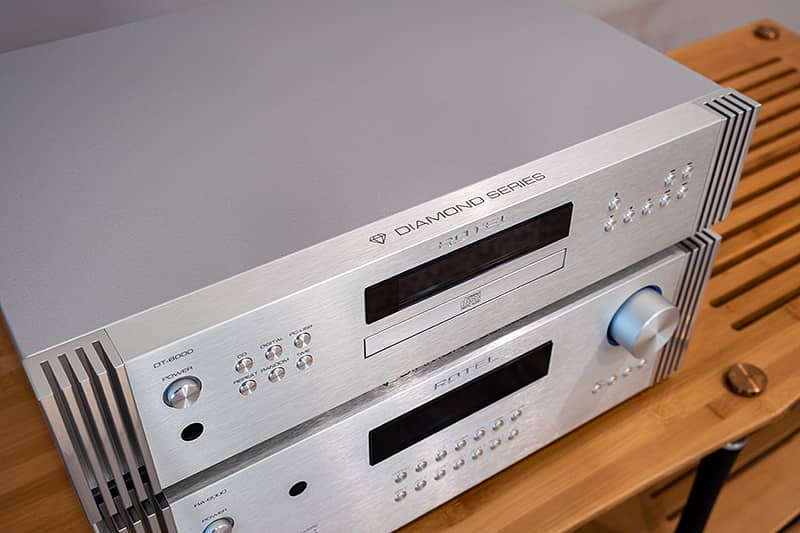 Thanks to the widespread publishing of the press release, you may already know that. Did you, however, know that the DT-6000 is Rotel’s 32nd CD player design in its long history in the industry? Thirty two! I’m all for boutique high-end audio, but I’ll take that level of experience over an attractive newcomer any day. Digital sources are extremely critical in modern HiFi systems, and excellent design requires a deep understanding of how to avoid jitter, noise and distortion.

Did you also know that every transformer Rotel devices use is manufactured by Rotel in their factory, and that 25% of the entire company’s staff work solely on the precision task of designing and building the custom transformers? The storied brand also invested heavily in the unique “slit foil” technology in their power supply filter capacitors, becoming the sole licenser of that patent. This offered access to unique values and enabled precision implementation by the Rotel team.

In prioritizing refined power delivery, Rotel proves that it knows what matters in HiFi. Source devices desperately need a quiet power supply to compete with the best in the industry. Power delivery to an amplifier is tied to the capability of its supply, and the quality of that power relates directly to the linearity and distortion characteristics of the listening experience. Rotel’s intense focus on cleanliness and availability of power shows both a proper sense of priority and a great example of how they leverage their vast experience.

The Diamond Series duo are the new kings of Rotel integrateds and disc players. They build upon the success of the previous flagship “Mark 2” updates for models like RA-1592 and CD14. The Mk II wave came after Rotel’s Tribute series collaboration with Ken Ishiwata of Marantz fame, and after the current lineup from sister-brand Michi. Ken’s routing and signal philosophies were taken into account in this next wave from Rotel, as were applicable technologies developed by Michi.

In short, the new Diamond Series products do two things. They celebrate the incredible 60-year milestone for the company, and they showcase innovations from the brand’s last decade and beyond, presenting the best that Rotel has ever made.

Let’s look at each of the Diamond Series products more closely, starting with the integrated amplifier. While together the RA-6000 and DT-6000 form a formidable system, they each contain a digital converter and can be enjoyed separately. Interestingly, this flexibility brings about the only negative comment I had to give to these products and this system as a whole. But I’ll get into that in a bit. 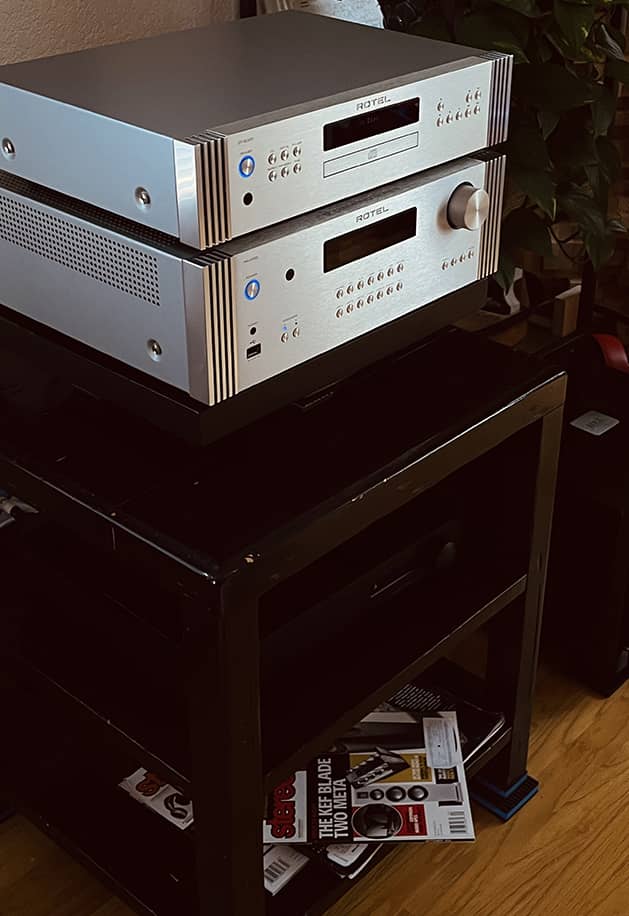 Unboxing the Diamond Series products was a treat, with the precision and cleanliness of the packaging practically shouting “We’ve been doing this for decades.” But the real fun came after the pieces were loosed of their plastic and fabric covers and it was time to remove the protective tape covering the gleaming chrome corners (chrome on the silver version, that is) of the faceplates.

According to Rotel, the chrome corner pieces are actually an homage to prior product designs that sometimes used heat sink fins for decoration as well as dissipation. The Diamond Series corner fins are cosmetic only — the real heat sinks for the powerful integrated amp sit just inside the side walls of the chassis.

After spending time with the Diamond Series components, I really grew to appreciate what the faceplate and shiny corners do for the looks of the models. Especially in low-light settings, the Diamond faceplates catch the light just right, and the chrome at the ends frames the front with a subtle pop.

A smart façade isn't everything in HiFi audio, of course, but bearing in mind the company's philosophy of balance in design, it's great that Rotel engineers acknowledged the desire of consumers to match the looks with the sonics. It's fitting that these, the highest-performing products yet, present a new level of finish and sophistication from the 60-year-old brand.