The RA-6000 is full of useful functions, and a collection of buttons on its faceplate isn’t just appropriate, it’s appreciated. I don’t want to have to find a remote to use a piece of HiFi gear, personally.

The easy things to love about the RA-6000 center around the sonics -- wide bandwidth presence, ease and quickness of power delivery and the ability to get fulsome when called for or zippy when required. These are impressive qualities, but I also discovered more practical elements that I had affection for.

I didn’t expect to be writing this when I started, but one thing I discovered I love about the RA-6000 feature set is the stinkin’ menu. I’ve tested thousands of products for The Music Room and have punched through mountains of menus, let me tell you, and the RA-6000’s has got to be one of my favorites. 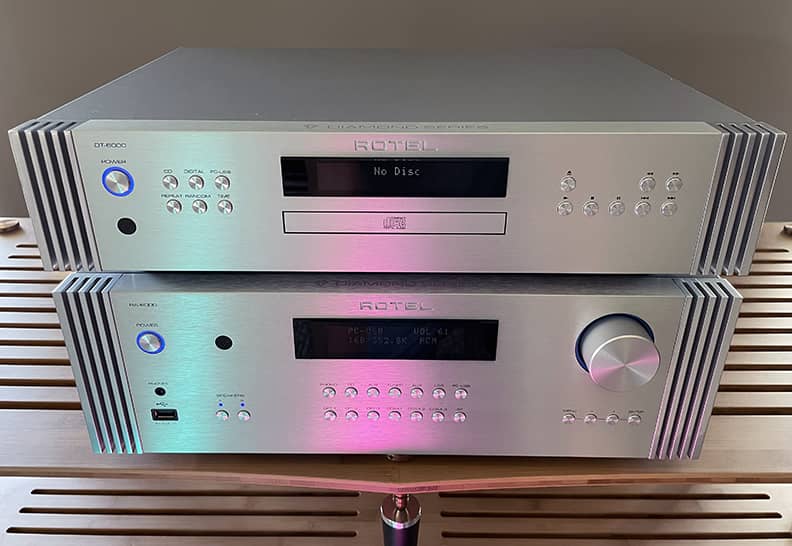 I know it’s not a big deal, and honestly, it’s a small part of the whole experience. It’s got a generous amount of items which are each useful, and is instantly understandable. It’s just a well-thought-out menu, and I appreciate it. I chalk this small, but 5-star feature once again up to Rotel’s decades of experience with these things.

I also like how kind of dim and crisp the display is. I know that the menu’s got some control options for the dimming, and it can be made brighter, but in general, forgoing the large and über-bright OLED displays we see everywhere these days for a more tasteful if a bit throwback look, to my eyes, works better with the overall design motif.

The only downside is that if you’re more than 6 feet away from the display, you might not be able to see the volume setting or the track number without getting up. But I still like it in my room more than the garish, oversized readout of my own DAC, and my eyes don’t get stuck on it when I’m listening.

I get why some brands think bigger is better regarding display text, but given that the RA-6000 remembers volume and input settings when it’s switched off or in standby, this issue seems a bit moot. For my A/B comparisons, if I needed to adjust levels between inputs, I adjusted the volume by ear and then got up to verify with a squint to the display, and was perfectly content with that method. 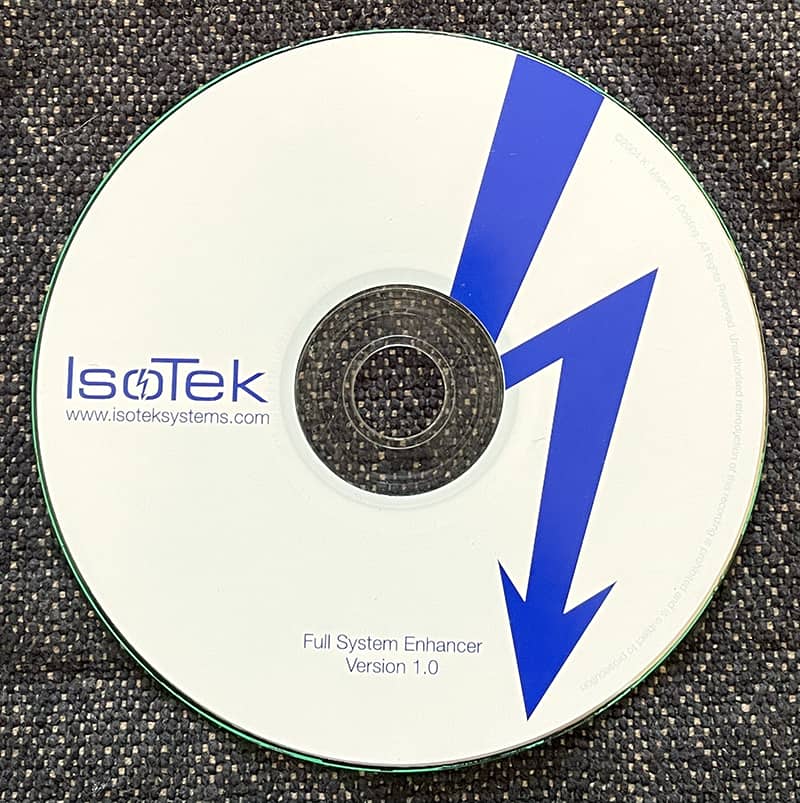 The front panel and remote buttons allow for easy input switching (via relay), and at the bottom left of the faceplate, another old-school feature graces the eyes: buttons for Speaker A and B. Designed to send sound to a second set of speakers in another room or outside, this function actually gave me a bit of flexibility for the task of burning in the brand new components.

I have REL subwoofers, so I take my music signals from the speaker outputs of the amplifier and send them into the high-level input of the subs. In this case, I connected the subwoofers to the Speaker B outputs and attached the speakers to A.

I played a specialized burn-in disc from Isotek, which has little in the way of sub bass. This allowed me to turn off the main speakers and push the load into the high impedance input of the subs without engaging the “auto off” feature of the amplifier (which would have happened if both Speaker A and B were off) and let the system cook without having to hear it. For a complete burn-in, I’d need to get some current flowing to speakers, but not having to do so 24/7 while still getting the electronics to normalize was a gift in my small-child-filled and busy house.

Finishing up a look at the front, Rotel’s trademark blue halo around the power button and volume knob is implemented with the perfect brightness to just pop a little bit without ruining the mood when the lights go low. Looks great in daylight, and even better when it’s darker, in my opinion. 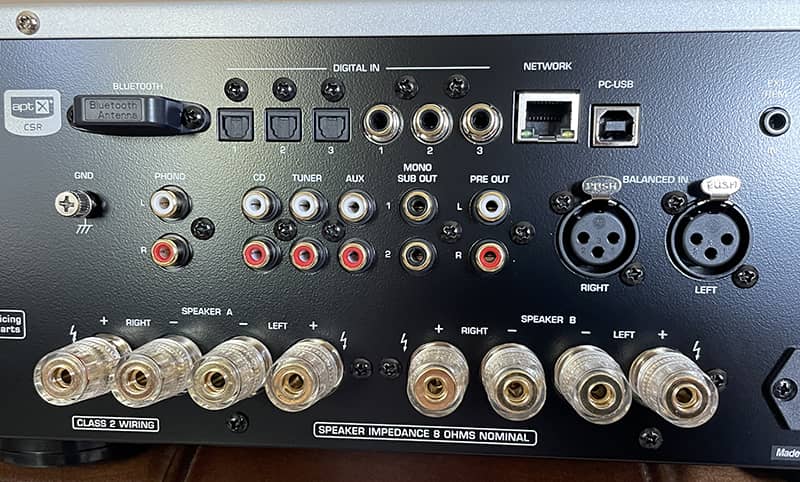 The back panel is straightforward, and clearly laid out. Binding posts for speakers A and B are, however, arranged the way some manufacturers set up parallel posts for the positive and negative. So if you’re like me and don’t look too closely at the labels of the posts, you may end up scratching your head and pondering why only one channel is playing. Easy enough to use though, once the layout is understood.

The RA-6000 accepts mostly RCA analog inputs along with its array of digital but does have a balanced analog XLR in as well. The output voltage specs of the disc player show a doubling of voltage from the XLR output versus the RCA, which backs up the claim that the output stage is differentially balanced. This was what I used to connect the DT-6000. I was hoping I could also connect the pair digitally because I wanted to compare the CD player through its own DAC against the RA-6000’s Texas Instruments DAC to see which I liked better, but the DT-6000 has no digital output.

Looking closer at the DT-6000, the first impression is that it’s small, light, and very precisely constructed. Inside the beauty, it’s evident that Rotel didn’t waste any space in this chassis, which is something I appreciate. A lighter and smaller chassis is affected less by in-room vibration, which is critical at the source position in a system. 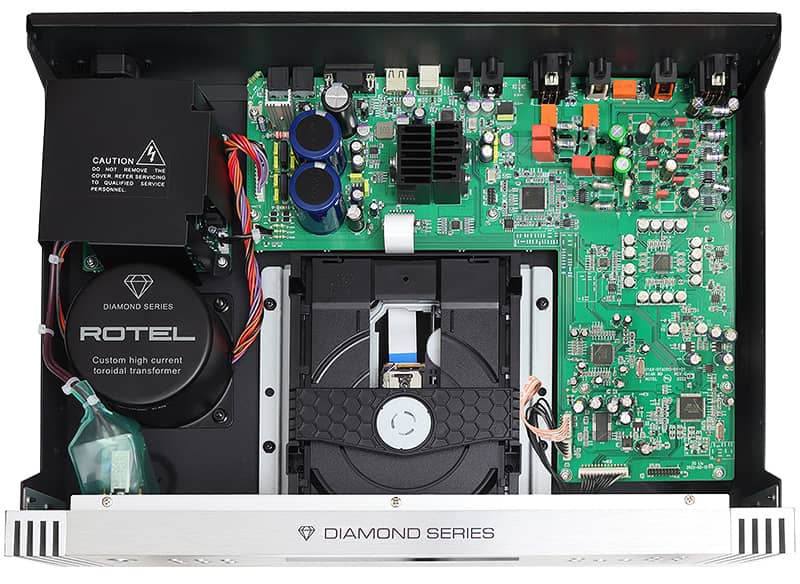 The power supply’s got a custom potted toroid transformer and the proprietary slit-foil capacitors, and we can also see pricey film and polystyrene caps throughout the audio circuit. The square-ish array of caps around the DAC chip to the right of the board are the unique analog output filters which bypass the “datasheet” stock options on the chip. This is a technique used in very high end DACs and digital products, and I have to give Rotel’s engineers kudos. 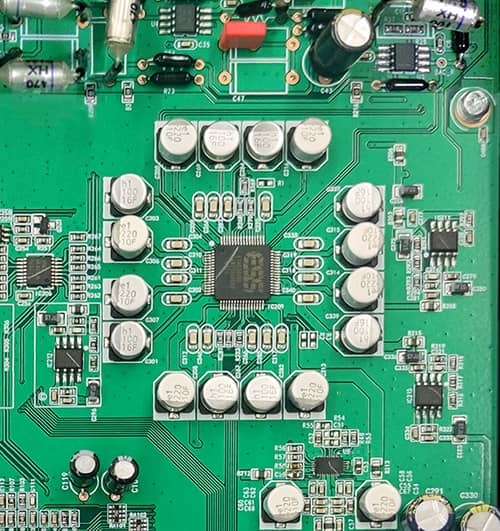 The reason it’s an advanced approach is that designing proprietary filters for a unique DAC architecture is a very difficult thing to get right. DAC chips from chip makers with business in more industries than just HiFi tend to get pragmatic with output filters, and generally suggest on the chip’s datasheet something close to a brickwall roll-off near the Nyquist frequency.

More experienced audio engineers understand the chip makers are trying to offer easy applications for designers to implement. Rotel takes the extra step to redraw those slopes and move the filters just right, so they still remove all the DAC’s processing noise but affect the top end of the music less.

Viewing the DT-6000 through the lens of history, I think you just can’t talk about this thing without mentioning that this is, to bring it up again because it’s a really important point, Rotel’s thirty-second CD player design. The priceless experience with these products shows up everywhere you look.

The DT-6000’s got just the right amount of functions – all the ones you want, but no Nakamichi-esque front-panel button explosion. It’s quite a bit smaller than the RA-6000, but sitting atop the amp, the player’s front panel design gives it a smart perch and presence.

There’s nothing here I can quibble with – it’s perfect. Its execution is so flawless, in fact, that we’ve decided to make it our reference disc source in The Music Room’s main listening room, the Listening Lab.

Is it a swanky dCS transport with proprietary DAC architecture and thousands of dollars in boutique parts? Or a sculpted megabuck beauty like those from Esoteric and C.E.C.? No, it’s not trying to be that, and it never will be as long as it carries the badge of Rotel. This is a reference player for the vast majority of us, and at its price there seems to me to be no sonic or functional equivalent.

In use, the DT-6000 still feels like a luxury player, with a smoothness of operation that belies its price tag. It’s got the same classy display as the RA-6000, and will also keep critical parts warm when not in use thanks to an auto-engaged standby mode. Relay clicks accompany certain functions just like the integrated, showing more attention to noise reduction.

On the back, just a few digital options are included, with one coax and one optical contrasting to the RA-6000’s three each, as well as USB. Both products allow music to be played back from a thumb drive, but only the RA-6000 goes further with analog, BlueTooth, and MM phono inputs.

I was able to compare the digital sections of the two pieces by sending optical and coax S/PDIF out from one of my Roon endpoints, a Raspberry Pi type of thing with a linear power supply, to the DT-6000 and RA-6000 individually. While not a perfectly scientific analysis due to differences in digital cabling (and transmission method: optical versus electrical), the extra XLR cables in the mix, and other things, this was a pretty good comparison and allowed me to quickly switch between inputs on the RA-6000 and determine that I liked the DT-6000’s DAC section a little bit more than the RA’s.

The DACs did sound similar to each other in overall character, but the signal path going through the DT-6000 to the RA-6000’s balanced analog inputs offered more clarity in the center image, better image depth, more dynamics and a little more “life” to the music. The Texas Instruments-based DAC in the RA-6000 was no slouch, but I came away quite impressed with the implementation of the ESS Sabre in the CD player after doing the comparison.

It does seem that Rotel focused on the DT-6000’s D/A circuit a little more, going so far as to reprogram the output filters and implement them via discrete analog components. Besides the chip differences, this move seems to influence the performance quite a bit. 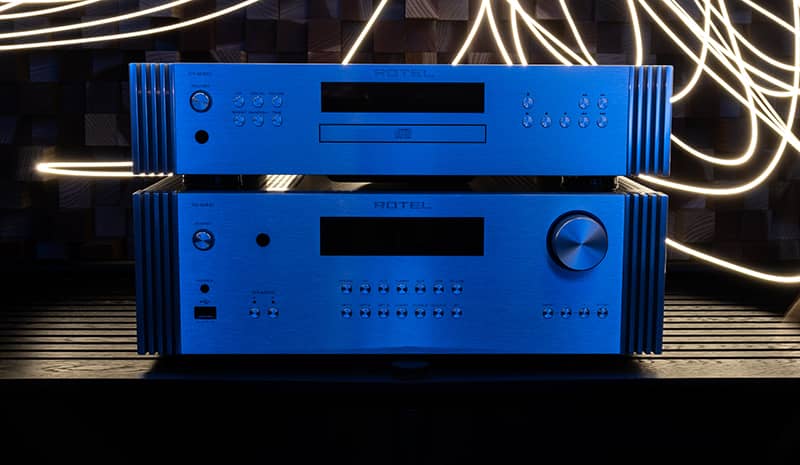 During my listening, it became obvious that the integrated amp and disc player each benefit tremendously from a proper burn-in. Right out of the box, both the RA-6000 and the DT-6000 sounded somewhat thin and on the sunny side of neutral, but I heard that mellow and change after just 50 hours of playing. After an entire week, around the 150-hour mark, I heard the whole system congeal and blossom into a very rich and high end-sound.

Because I must always be on the defense against muckraking naysayers and casual accusations of snake oilery (I write with a wink ;), I’ll simply remind readers that in my audio universe, some of the staunchest advocates of the need for new electronics to go through a stabilization period, or burn-in, are actual professional HiFi design engineers. My friends have compared final prototypes with thousands of hours of use against the first batch off the production line, and they’ve measured frequency changes as their drivers settled.

They know it’s real, I know it’s real, and because of this I like to give brand new products quite a workout before seriously listening. I use IsoTek’s awesome system enhancer discs which contain long tracks of white and pink noise, sine sweeps, blips and bloops and all that good, unlistenable stuff. I hit these products with that heinous “music” on repeat for a week or two, which seems to do the trick.