The word ‘balanced’ gets a lot of play in HiFi audio, and unsurprisingly the single word happens to mean a few different things across the hobby. Whether adjusting the “balance pot” of input tubes, balancing a tonearm, or splitting the signal into opposite phases to take advantage of common-mode rejection (i.e., XLR), the context informs the meaning.

Rotel is a well-known Japanese HiFi manufacturer that has thrived in the audiophile sector for ages. Everyone knows Rotel. But if you assumed that their “Balanced Design Concept” slogan meant the devices use balanced circuit topology or some other functional application of the term, you wouldn’t be entirely correct.

While many of their products are electrically balanced, the real meaning of the phrase from the longtime audiophile brand is more philosophy than function. “Balanced” to Rotel encompasses the entire design process and characterizes each engineering decision along the way. Balanced is an approach that is the key to delivering the highest performance value possible, given the prices charged.

You see, Rotel is not a manufacturer advertising no-holds-barred and no-expense-spared products with runaway price tags. Rotel has always aimed its sights on making music magical for the most listeners. They realize that the segment of audiophiles whose systems’ costs rival luxury vehicle prices is minuscule compared to the vast number without intensely dedicated listening spaces or extravagant budgets, but with the same lust for audiophile bliss.

Balance is essential for Rotel, and bringing serious audio performance to the lower price points is a more significant challenge than most audiophiles understand.

Let’s use an amplifier as an example. There are the raw materials of the chassis and heat sinks to consider and their fabrication into their shapes—pricey, pricey stuff and increasingly so in today’s manufacturing landscape.

There’s the all-important power supply—should it be unregulated? Might an EI transformer save cost over a better toroid? Should the large bank of electrolytic filtering capacitors be an area for savings?

What about connectors, wiring, feet, and boards? Should the PCBs and their traces be thinner to save money, and should signal paths be routed on the boards using the shortest path to allow for smaller boards and further cost savings? 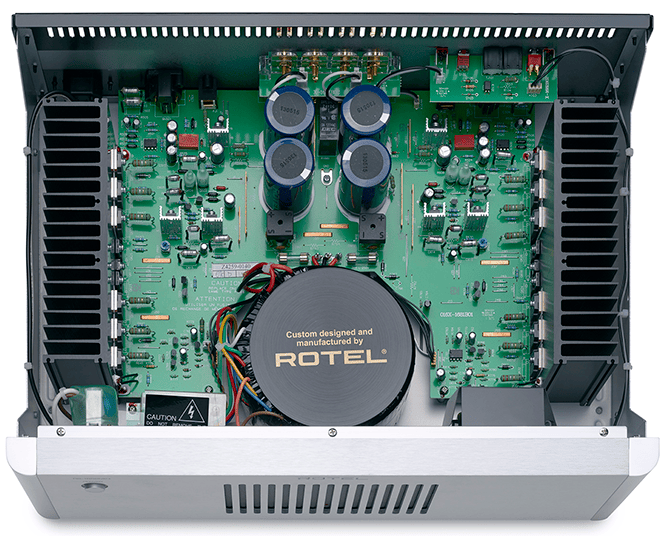 It goes on and on when developing a product with a hundred or more parts like an amplifier. It continues con gusto in products housing multiple hundreds of components, like integrateds with DACs or CD players.

Rotel engineers say no to the above questions, rejecting the shortcuts and spending as much as possible on every sonically important part of the machines. Their thick PCBs provide excellent star-grounding to keep the noise floor low. The signal paths are arranged symmetrically for best electrical performance, regardless of the board size.

The “slit-foil” capacitors used are well above the quality level that other engineers might employ in the power supplies, and the transformers are the biggest and best that the brand can manage to put in there.

Rotel eschews the use of inductors on the outputs of their amps, which is uncommon. Many amplifier makers include the coils to help keep their amps stable under difficult loads or in the presence of RF (radio frequency). Instead, Rotel decides to spend more to build stability into the design so that no inductor-induced sonic degradation occurs after amplification.

Amplifiers are a great example because of their relative simplicity, but it’s no stretch to imagine that the difficulty of managing the budget increases with complexity of the circuit. And that’s where guiding philosophies like Rotel’s help to ensure excellent results predictably.

The complete Balanced Design Concept that no one feature or element of a Rotel product may take away from another in the design process results in a high standard of excellence across the board. But that alone isn’t enough to explain the fantastic sonic pedigree of the HiFi brand. High-quality parts only go so far, and the choices made in the engineering of HiFi gear make all the difference to the consumer.

Electrical engineers train to find the balance between ultimate performance and cost management. It’s the gig. The HiFi product designs with no budget ceiling are few, if not nonexistent, and the more affordable the end product is, the more challenging the job of wringing results out of it. 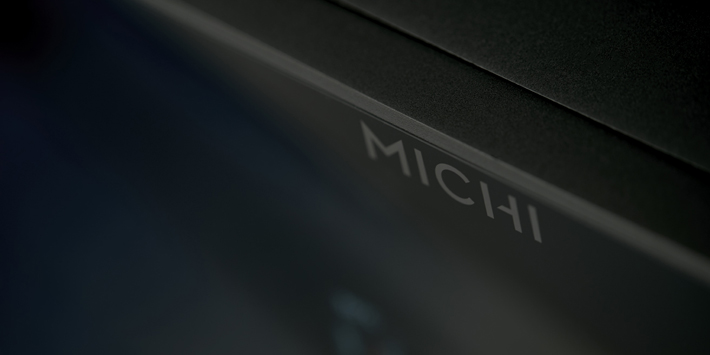 Looking back on the history of Rotel in the audiophile sector, this has always been their bread and butter. They’ve been fighting for what’s possible against challenging odds. But in the early 1990s, after proving their worth on the difficult products, the Rotel engineers began to expand those budgets and try out new concepts. In the early 1990s, Rotel announced a higher-end lineup of products for their local Japanese market under the brand name Michi.

Needless to say, the desperate thirst out there for more extravagant and innovative offerings from the crack team at Rotel was evident as Michi products flew off the shelves. Michi became a staple in its price category for the Japanese audiophile market and developed into a “proving ground” for new Rotel concepts and technology. Years after their introduction into Michi products, specific circuits and design elements trickled into Rotel’s products.

Fast-forward to the recent reintroduction of Michi, this time to a worldwide audience, and the gang is, essentially, back together. Why Rotel put the Michi brand on pause to begin with is a question for another day, but the brand thinks the time is again right to test the limits at Rotel, and that there’s an enthusiastic audience out there for the extravagant approach.

Take a fresh glance at Rotel and Michi – the boys in Japan have been busy. Michi’s new releases are getting rave reviews, and the “Mark 2” and new “Diamond” anniversary editions of Rotel products are making similar waves. But perhaps most notably, the brand made the HiFi news recently when they brought in legendary Marantz designer Ken Ishiwata before his passing to try his hand at improving their products. The idea was that the new versions would serve as Rotel’s tribute to the contributions and skill of Mr. Ishiwata.

The story goes that Mr. Ishiwata looked over a large display of Rotel products and gravitated immediately toward the CD11 – the $600 disc spinner that had already won Rotel accolades and awards. It’s possible that, to the visitor, this was the most important (because it’s at the source end of a system) and hardest to design (due to the minuscule budget) product in the entire lineup.

Now that’s an engineering power move. I love it. And, of course, Mr. Ishiwata found ways to fine-tune what was already a good thing, wringing even more performance out of the budget machine. He and Rotel released the “Tribute” version of the CD11 before moving to the integrated Tribute amplifier, the A11.

It’s a memorable story, and now that Mr. Ishiwata is no longer with us, it remains a testament to the legendary designer’s technical engineering chops and shows why he was a legend.

Back In A Big Way

Michi is trending back up with an emphatic review of the S5 stereo amplifier in Stereophile and a growing following for the brand’s black glass minimal chic look. Speaking for ourselves, in The Music Room’s Listening Lab right now, we are loving the power and grace of the M8 monster monoblock amps paired with our Dali Epicon 6 speakers.

There’s one word we feel when sitting in the sweet spot or when pondering the lineup of Rotel and Michi, and that word is “balance.” Everything is maximized, nothing emphasized, and it’s the music that dictates the experience, as it should. Grip and control are, of course, off the charts. But it's the musical grace of Rotel / Michi products that keep us coming back for more.

Whether you want to experience Mr. Ishiwata’s brilliance without breaking the budget or taste the fruits of the Rotel design team’s innovations via Michi, The Music Room is the best place to try it. Our vast offering of new and old products makes dream systems easy to assemble. Our best-in-class shipping always ensures quick and safe delivery. And our experienced and polite customer service staff are widely lauded in the audiophile community.

Chat with our experts today about Rotel and Michi, and bring some balance to your listening life.