From the viewing position, the Aqua La Scala Mk II Optologic DAC's faceplate presents itself in an elegant yet stately manner. I'm greeted with subtle curves on a traditional rectangular shape, which really do the trick to make it stand out among other boxes on the rack.

The crisp lettering on the front indicates more tasteful intention in design, and is almost a lesson in typography. There are well chosen instances of capitalizing versus not capitalizing, there are serifs and sans, text is arranged in curves and vertical as well as horizontal, and the font choices satisfy this former graphic designer’s desire for a unique look. 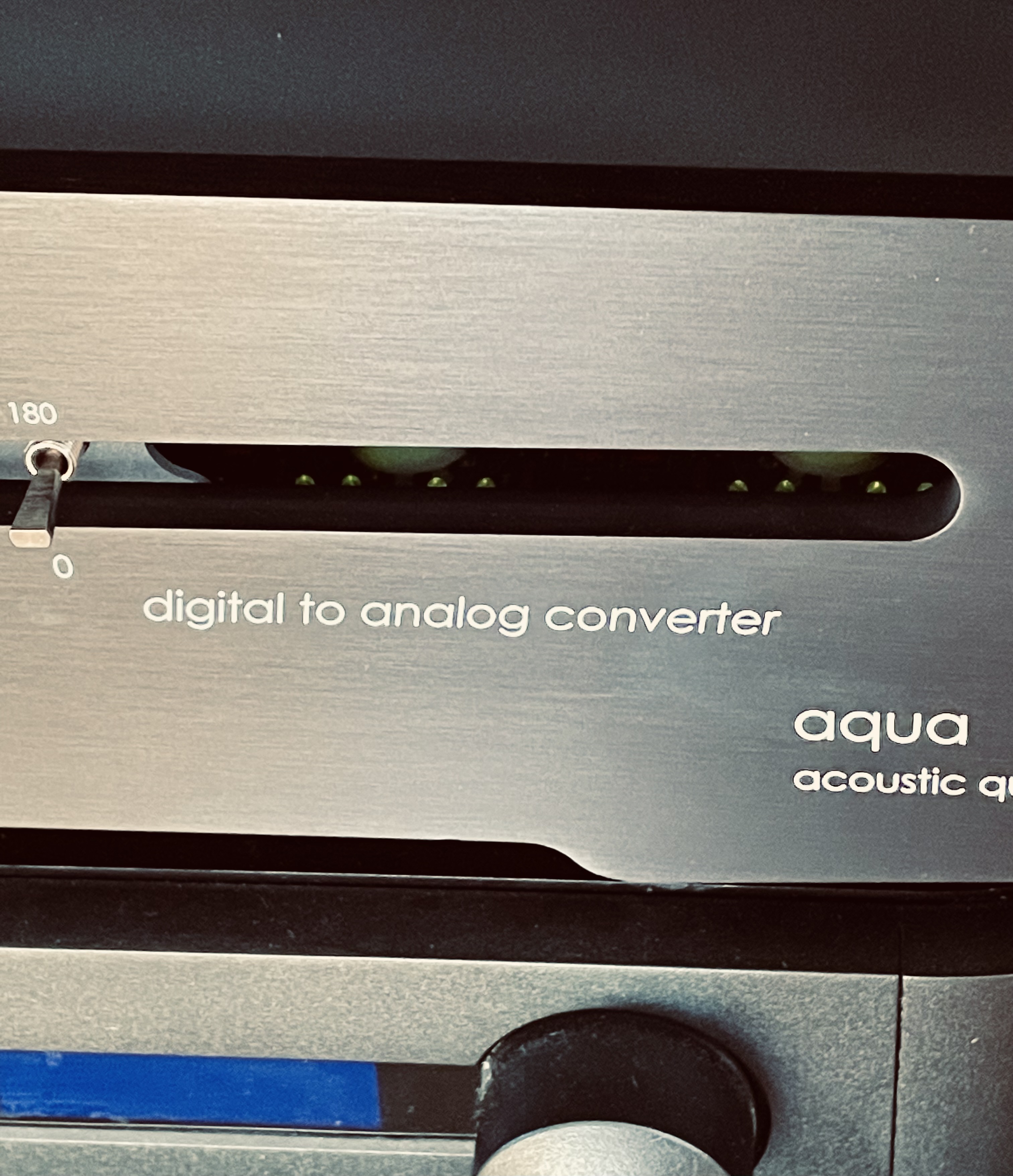 This probably shouldn’t be surprising for a product from Milan, Italy, but I’m just attracted to the front, and I like looking at it. At this level of HiFi equipment investment, a product should strike a harmonious balance in your rack and be easy on your eyes -- just my take.

There are zero buttons, which I like, and just two vintage-style knobs and a phase switch. There’s one subtle green LED indicating power, and then there is the tube viewing window. From slightly above the DAC (as you get up from the chair to refresh your drink, you see it), a small row of LEDs in front of each tube is fleetingly visible, making for a cool and once again distinguished effect.

The rest of the La Scala chassis gets right to business, and offers much more function than form. The matte grey Nextel coating on the top and sides achieves excellent damping characteristics for the otherwise-typical enclosure.

Taking a look at the back panel, we see all the standard inputs, including even BNC S/PDIF. The RJ45-style jack, however, is what Aqua calls the highest fidelity input, offering direct I2S connection with its other source products like the LinQ and La Diva. This takes place via the AQLink input and bypasses the downconversion to S/PDIF for a truly balanced digital signal transfer.

The Aqua La Scala Mk II is an obviously innovative, conceptual kind of “what if we did this”product, undeniably different from its contemporaries. Christian Anelli, Aqua’s chief designer, believes he’s worked his philosophy into a state-of-the-art converter, and I’m eager to hear it.

But it is hard to talk about this DAC specifically without diving deep into its unique makeup and design choices. The marketing information provided is distinctly engineer-driven, and while I have no complaints on that front because I love to learn about the nitty gritty of audio gear, it does get pretty thick at times. I’ll do my best to translate some of the tech-ier speak about this buzzworthy DAC.

Years ago in the audiosphere, it was FPGA-based DACs topping the buzz charts, with brands like Chord, Exogal, dCS and PS Audio stoking the enthusiasm for a new way to convert digital music. This approach rejected the restrictions of traditional DAC chip architecture, instead allowing brilliant digital designers to construct their own converter from scratch, with supreme sound quality as the only goal. The letters FPGA stand for Field Programmable Gate Array, which is the large programmable chip that houses the DAC’s program.

More recently in the HiFi DAC scene, the resistor ladder architecture has moved back to the forefront of audiophile chatter and excitement. It’s not new technology at all, but it’s always been extremely expensive and difficult to produce. What’s new is that in the last decade or so, there’s been a proliferation of high-precision closely matched resistors, available at more reasonable prices than ever before. Resistor ladder DACs (or R2R as they’re also known) are no longer the domain of the Ultra-Fi elite.

Many R2R DACs get some help with the digital decoding via traditional chips, but then outsource the filtering and conversion to a sizable array of resistors, which must be matched very closely. The higher the bit depth desired for the DAC, the more resistors needed, and the more they need to match perfectly. It takes an advanced configuration and many resistors to achieve the 24 bits that the La Scala Mk II boasts.

R2R designers and listeners say that the use of an analog filter results in more natural sound, more depth and more emotional impact in the music. Aqua’s chief designer Christian Anelli agrees, and in the La Scala Mk II, he’s actually combined both of these buzzy technologies. Eschewing the traditional chip altogether, La Scala’s special FPGA decodes the digital signal before sending the bitstream to a fully balanced ladder of resistors on the analog side. Smack dab in the middle of that journey is Aqua’s secret to keeping this whole scenario noise-free: Optocouplers.

We’re now getting to why this DAC is called an “Optologic” DAC rather than an FPGA or an R2R or even tube DAC. Galvanic isolation using optocouplers (essentially, a light and a receiver tied together in a box) means the un-filtered digital signal makes it quickly to the resistors with the noise intact -- it’s their job to filter it out, after all -- but thanks to the optocouplers’ isolation, the ground plane of the DAC never sees any of it. Optocouplers are used elsewhere in electronics, including other brands’ highest-end DACs. I think they’re very cleverly used here, and Aqua is obviously proud of the solution.

After filtering, the analog signal is sent to the tubes and to MOSFETs -- it’s a hybrid output aiming to reap the benefits of both approaches, and it operates in Class A with zero feedback applied. Choice of single ended or transformer-balanced XLR outputs finish the circuit path.

There are more tech points to list, such as the discreet regulators, the separate analog and digital transformers and other power supply highlights, but what I described is a pretty global view of what we’re working with.

So with that out of the way, it’s time to take a listen.