Regular readers will recognize my tweaked-out main listening system, which features somewhat re-conditioned six foot tall Dunlavy SC-III speakers and an extensively modified Audio Research D-115 Mk II all-tube amplifier. They were contemporaries when they were made in the 1980s, and they sing together now as bionic, futuristic versions of their original selves. It’s a great pairing. 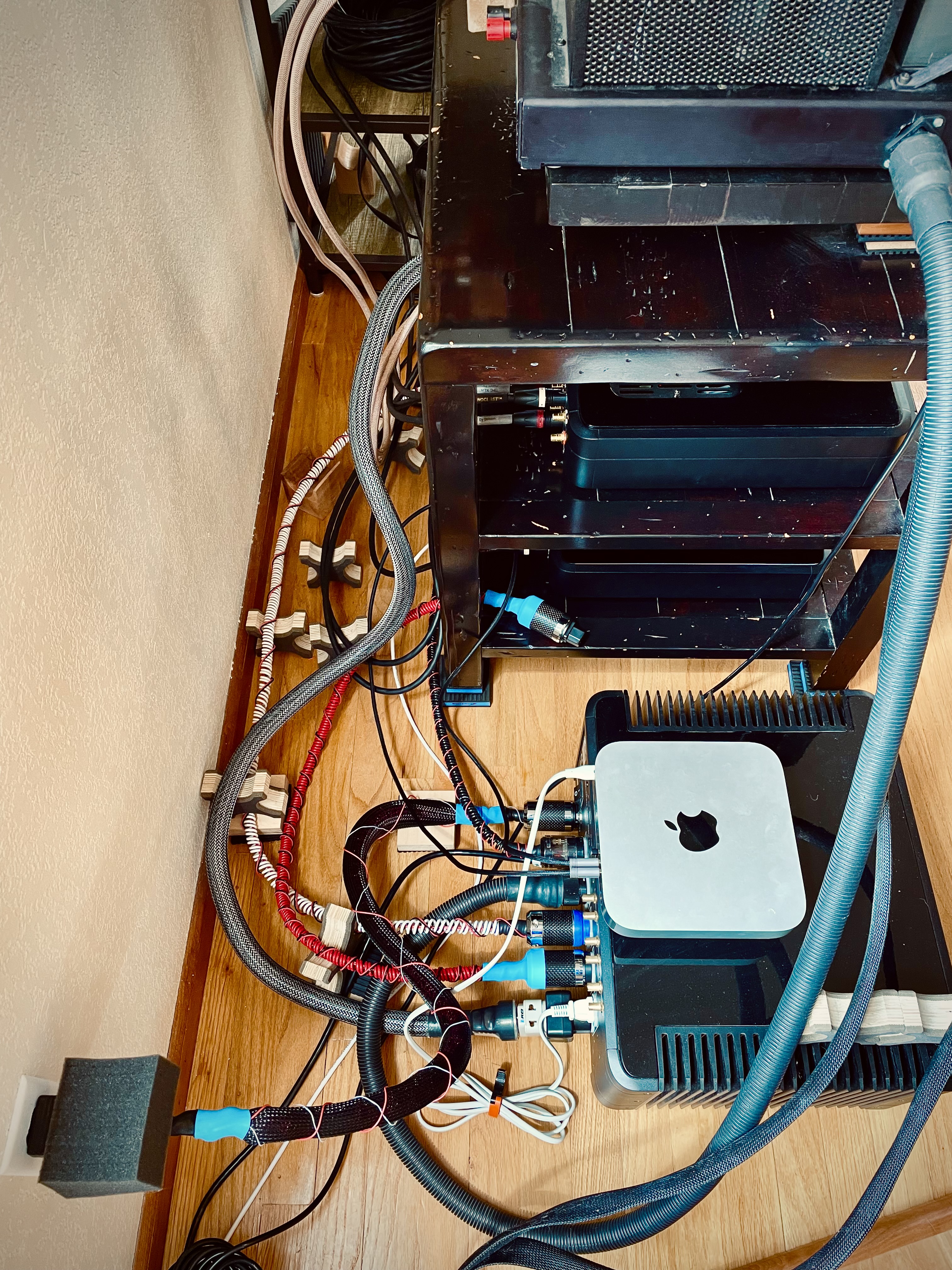 The rest of what I’ve got centers around power conditioning and my DIY cables. A Furutech rhodium outlet feeds a rhodium plugged special power cable of my own design, which powers the PS Audio P10 PowerPlant regenerator. While I’ve yet to find a DIY recipe that beats the Belden ICONOCLAST XLRs I use for the signal to the amplifier, personal explorations in power cable and speaker cable design have proved extremely rewarding.

I did my best to allow for impartiality, and evened the playing field at every turn during this evaluation. I assembled two of the same type of every cable needed and grabbed a balanced preamplifier from The Music Room with a remote so I could change DACs without having to move from the listening position. I noticed that the La Scala’s full output was a hair quieter than my reference DAC, so I spent time with a sine tone and a meter to make sure the volumes matched.

I chose to evaluate the Aqua La Scala Mk II primarily through the USB input, because I believe internal USB to I2S conversion presents a challenge in most DACs, and at the same time it’s likely the most popular input used in DACs today. I used an Apple Mac Mini running Roon, which allowed me to quickly switch zones for comparison. It also allowed me to upsample the music to 384KHz using Roon’s internal DSP engine, which sounded like a clear improvement over native on most tracks.

Full Figured, and Full of Grace

Danish quintet Abekejser (don’t ask me how to pronounce that) released a stunning album called Blueprint in September of this year. Self-described as “electronic jazz for digital natives”, the record soars through riff- and melody-based compositions, melding well-recorded and organic sounds of real instruments with the full spectrum of electronic accompaniment.

The final track, “The Mana Bar”, is a killer test for DACs and HiFi systems in general. The way the bass mates with the crisp midrange is something to listen for -- excellent electronics do a better job of keeping the bass intact at the source, and careful subwoofer integration pulls off the trick in practice. If subs are connected directly to the amplifier’s outputs, as mine are, the entire system can show off improved linearity coming from the source. And if the source and the speaker response is linear, you get to finally hear how good this track is.

In my own fairly well integrated setup, the La Scala Mk II makes this track a juicy marriage of resolution and weight. The bottom octaves produced by the La Scala are more articulate than can be called “warm,” but there is a pleasing fullness easily available when it’s present in the recording.

Focusing on the midrange performance, the La Scala Mk II delivers the clap snare and resulting reverberance in “The Mana Bear” with a kind of punch and snap that is rarely heard, present in memory only in DACs in elite price ranges. This could be due to that kind of “transient purity” often touted by the R2R faithful.

From the precise image localization at the song’s opening of a shimmering cymbal spreading across the right side of the soundstage, to the crisp synth solos ripping through the upper frequencies, the entire track displays a very natural sense of treble. Any hint of “digititis” is far from the mind for me, and the Aqua La Scala Mk II seems to want to get completely out of the way and let the music shine.

The term “musical” is hard for some folks to embrace as a characteristic of a piece of electronics, but to me it’s the quality of audio gear that does not not constantly remind you that “I’m here and I’m on!” Or better put, the tendency of the music to take your complete attention -- this is more rare in the HiFi world than you might think. This unit gets great points in that elusive category.

Flexible and Fleet of Foot

Moving to a pure acoustic recording, I’m reminded of Monty Python’s “And now, for something completely different” bit featuring John Cleese at a desk in the middle of a river. I’m not sitting in a river, but let’s try something different.

When reviewing source devices, it is important to cover both different styles of music and different levels and styles of recording. It could be tempting to take that to mean I could choose something soft and minimalist next for the evaluation, but instead I want to push the intensity up a notch.

Next is Wolo So by Balimaya Project, released late July of this year. According to a Pan-African Music magazine review, it “fuses traditional Mandingo music with London jazz,” which may not help pinpoint this insane, system-challenging ensemble recording -- it’s one you just have to hear to get the true sense for how big and complex it is.

The opening track “Balimaya” is a fitting introduction indeed, beginning simply with trilling and arpeggiating guitar, widening to the stereo marimba, then adding percussion… right up to the point when the 20 other players suddenly burst forth from the shadows.

The potentially dizzying density in the ensuing mix could be overwhelming for any converter, but the La Scala Mk II shows its dancing feet to be swift. I witnessed no confusion in the myriad images and enjoyed a full-figured big band ensemble in the commensurate pomp and glory intended by the musicians.

Much of this recording could become borderline unlistenable on a lesser machine, but through the Aqua La Scala, “Balimaya” is a thrilling and even captivating track. When there is such a natural sense of clarity amid everything going on, I can easily get lost in a whole album of this.