Weiss Engineering’s DAC502 reminds me of a speedboat. It’s got the right stuff in the right places, and dumps the extra weight to make racing form. It’s sleek, and boy is it honest. Those looking for a reference DAC with a touch of friendly sonic coloration should probably forget about the Weiss DAC502. After spending quality time with this modern music maker, I think it’s the most honest and accurate digital device I’ve ever heard.

Trying to ascribe sonic characteristics to it, or trying to find some attribute which it carries across different music and genres proves difficult. Comparing it to commensurate and higher-priced converters on the market shows that it puts out a more inviting, natural sound, and even at its gulp-inducing price of $10,695, it appears to compete well above it.

What’s interesting to me about the DAC502 (and the DAC501, by the way, which houses the same circuit in a smaller chassis) is the simplicity with which Weiss Engineering pull off this feat, compared to, just to name two examples, the more extravagant innovations and implementations of competitors Chord and Aqua.

I’m impressed and surprised that a series of philosophical power supply and digital clocking decisions, perfectly executed in service of top-of-the-line converter chips, in an otherwise straightforward layout can come together to compete in soundstage width, image definition and overall balance with about any DAC at any price.

But Weiss shows us the way. Let’s take a closer look at what they’re doing, and dig deeper into the pro audio company’s no-nonsense, high-performance digital converter.

When future Weiss Engineering president and chief designer Daniel Weiss began working for Swiss tape machine giant Studer in the late 1970s, he was getting his hands into the kind of work that his own company would later be known to dominate in the pro audio market. The 1980s saw a transition from analog tape toward digital, beginning with DAT (digital tape) and then moving toward recording to solid state drives, and Weiss was there at the ground floor with cutting-edge R&D experience in digital conversion and processing.

Now, in the 2020s, Weiss is still at it, continuing to push the bar forward. Weiss has been intimately involved in the development of digital converters, upsamplers, and clocks now for decades. The company’s machines have been responsible for crafting the sound of some of the new century’s biggest hits.

Early 102 Series and IBIS systems became a new benchmark for digital sound in mastering studios worldwide, and the later Gambit Series products found their way to any lucky studio that could afford them. Knowing the utmost importance of accurate conversion and clean processing, many made that stretch. You could build a whole studio around a couple of Weiss components as the digital heart of the system.

Weiss’ high reputation and dominance in the pro audio industry earned its owner and chief designer Daniel a Technical Grammy Award in 2021. This award, which was added to the Grammys in 1994, highlights individuals or companies who make contributions of “outstanding technical significance” to the recording industry.

In honor of Weiss’ Grammy award, Bernie Grundman, one of the most famous mastering engineers ever, had this to say in a full page ad in the Grammy brochure:

“Daniel Weiss is without a doubt one of the pioneers of digital technology for the recording and manipulation of sound. He has always impressed me with his dedication and striving to find better ways to process sound, even though his products already have the highest praise throughout the industry.”

Some see Weiss’ high end Swiss D/A conversion in a studio to be a luxury, and on the “wish list.” Others see it as essential, taking sound at the source as seriously as possible and investing in a good foundation.

All of this comes into play when trying to understand Weiss. The outward appearance of the products show that this is not a company born from the audiophile mentality, but rather it’s a professional recording company whose circuits simply sound better than many if not most in the audiophile industry.

The DAC502 chassis is as straightforward, unremarkable, and unassuming as it gets above $10K in the DAC market, plain and simple. For such a great sounding DAC, it does not do much to convey its sophistication when the power button is in the “off” position.

Now that’s not to say it looks terrible. Quite the contrary; the finely bead-blasted faceplate has a high-tech feel and nice bevels on the edges. Having all of the controls housed in one spot via the touchscreen, sans buttons, helps present the “clean” look. It’s very tidy, and fine details are chosen well.

It just doesn’t look anywhere close to as impressive as it sounds. Contrast that with Chord’s DAVE, with its steampunk portholes, sweeps, curves and of course those light-up colored button balls. When you encounter the DAVE, the looks and performance of the DAC match each other a bit better.

But overall, this is not a major point. I could have skipped right by it actually, because in use I quickly forgot about this impression. The DAC is so good, I was happy to simply let the device do its unassuming thing.

I tossed a lot at this DAC, including plenty of challenging music, various interconnect and power cables, fuses, feet and more in the mix to see how good it could get. I still don’t think I found the “top speed” for this thing, and I tried.

So let’s look under the hood of this racing machine and find out why the “engine” takes this DAC to the highest levels of performance.

To those audiophiles who look at a half-empty chassis with a side-eye, consider that the DAC501 and 502 are essentially the same circuit. The DAC502 does offer a balanced headphone output in the back, but beyond that, the magic engine of these racing machines takes little space, and what fits in the 501 has plenty of room to breathe in the 502.

For most of the DAC, Weiss uses SMD (Surface Mount Device) parts, which means more precise tolerances, better matching and lower inductance throughout the circuit, and more predictable signal accuracy. It also means the various elements of the circuit – regulators, I/V stages, output stages and the like – can be seen in a bird’s eye view. It’s all high-performance-focused, but certain parts of the inner workings are easy to comprehend. 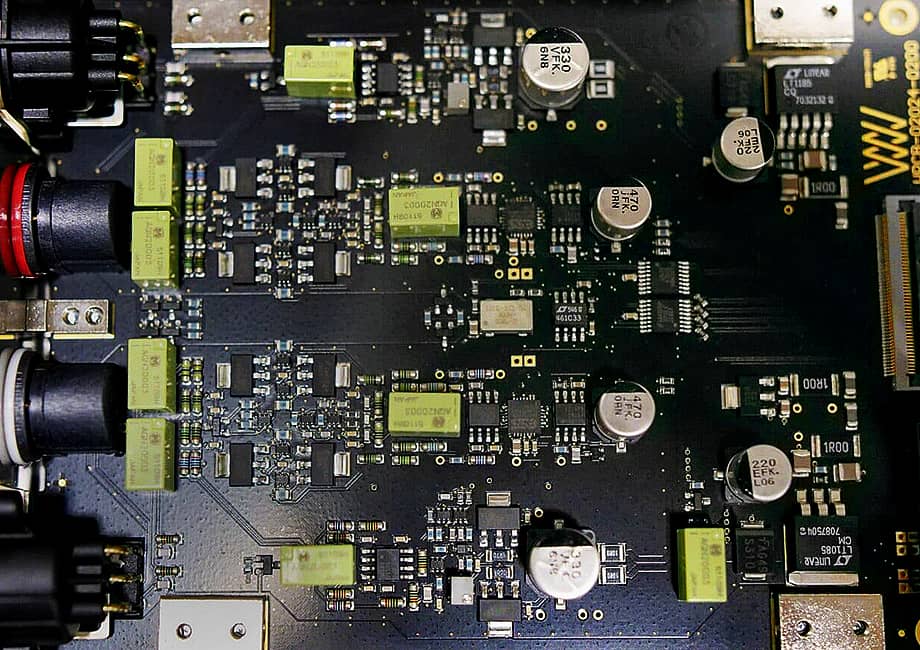 Arranged symmetrically and intuitively on the DAC board you see top shelf DAC chips, regulator circuits dotted left right and center, a voltage stage and its regulator, and discrete output stages - one per channel.

There isn’t a lot of bloat to this circuit – it’s clear where the R&D and money goes into these devices. Regulation everywhere and multiple rails of isolated power (separate digital and analog) are expensive, and seem to be the key to the exceptional sound quality of this DAC. The further you go into the high end of audio, the more you read about extravagant power supplies and intense regulation, and Weiss is using those philosophies throughout.

Why is it important to regulate and isolate every small voltage in the box, and to have advanced regulators throughout the DAC? Well, remembering that the music we hear is simply energy that we’ve modulated, and remembering that signal purity is essential at the DAC level before multiple stages of amplification, Weiss’ decisions make sense.

“About 195KHz.” The product specs say that all incoming digital signals are converted to this frequency (using either the 44.1 or the 48 clock) for ultimate conversion to analog. Why the chosen internal conversion frequency for the DAC502 converter sounds so good in this setup is only under the cap of Mr. Weiss and his R&D team. But the listening proves it out– the image clarity, inner detail retrieval, and realistic quality of the music presented by this DAC indicate extremely low noise power mated with exceptional clocking.

Reading about the 195KHz rate, I was curious whether I would appreciate any upsampling in Roon, upstream of the DAC. My own reference system DAC, the PS Audio DirectStream, responds quite well to conversion to DSD in Roon, and as we’ll come to find it shares a few things in common with the DAC502.