The front of the K-300i is pleasantly straightforward. A small display screen at right sits above a pair of volume buttons and a front-panel USB port. On the other side of the curved centerpiece is a simple set of buttons for control of the menu functions, and a power switch. 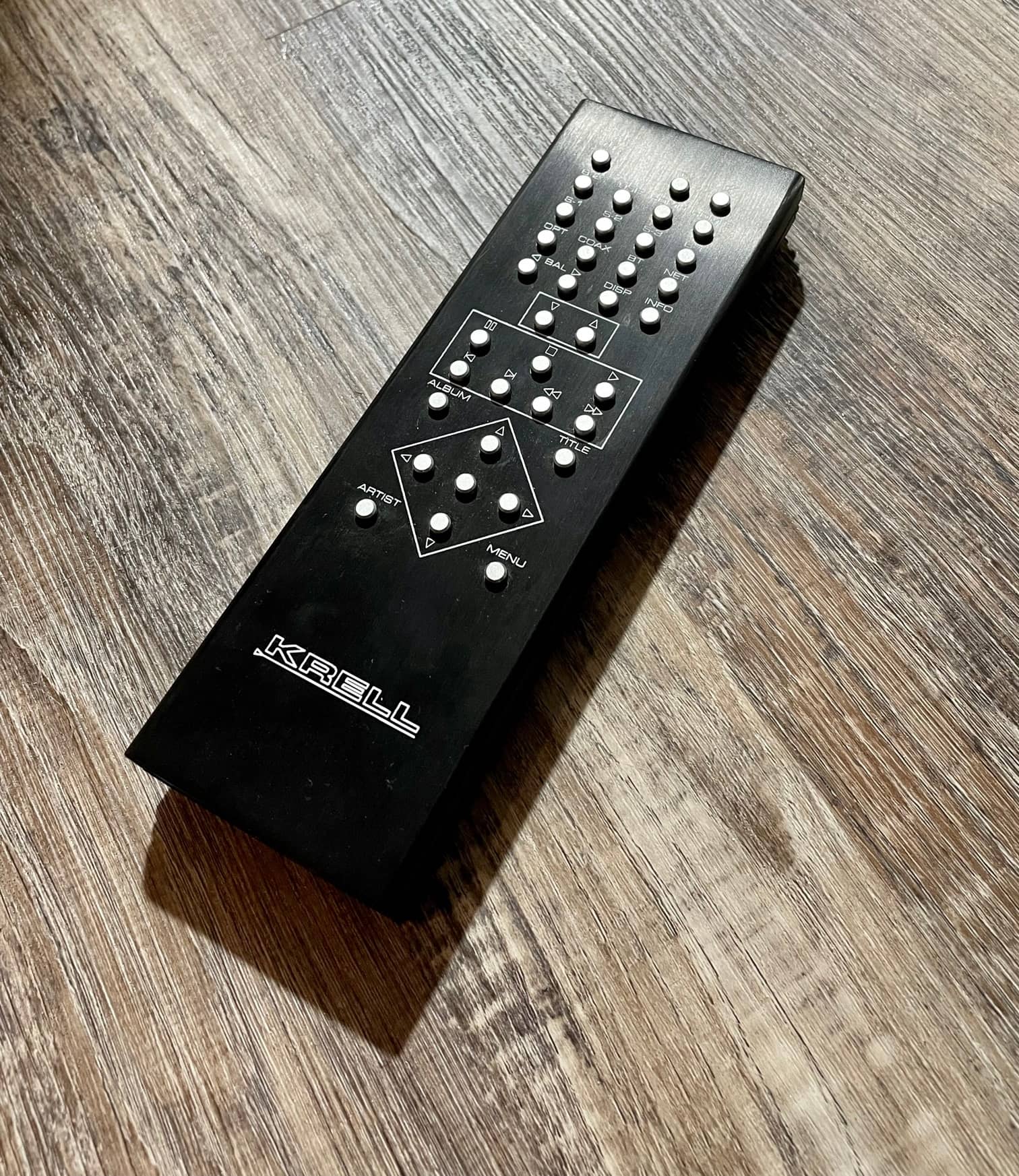 The remote is satisfyingly large and filled with much more function. Contrasted with other companies’ attempts at remote control minimalism, I like that plenty of functionality is able to be accessed from the listening position, and at the same time the K-300i isn’t rendered unusable in the event that the remote can’t be found.

Not that this remote will be lost by many. Its hulking size and metal constitution gives you the idea that in a pinch, it could also serve as a defensive weapon. You know, in case there are intruders to deal with while you’re listening to Shastakovich.

The base model K-300i is purely an analog integrated with six inputs - three unbalanced and three balanced. The rear panel is similarly straightforward and changes considerably when the digital input and DAC option are purchased.

With the $1K-extra DAC comes the usual S/PDIF and USB inputs, along with very thoughtful addition and forward thinking additions of HDMI, Ethernet and Bluetooth. I can list on one hand the number of true HiFi integrateds or DACs that offer HDMI, but I couldn’t fit all the friends of mine who would want this on both hands.

The HDMI is 2.0a and comes with an HDCP2.2 jack as well as an HDMI out, and the Bluetooth carries the latest version (5) and aptX for best fidelity from that easy input. Perhaps the most useful of these digital inputs, at least to me, is the Ethernet. The K-300i is a Roon endpoint which can decode MQA, and is also a Spotify Connect device. The sound quality increase moving to Ethernet-served Roon streaming versus a USB connection to a PC is one that more and more audiophiles are enjoying.

The way Ethernet packets move is more conducive to the demands of digital audio, and the format is less jittery or error-prone than previous digital transmission methods in the audiophile hobby. Krell was wise to make this product a Roon-ready device, as the music streaming and organizational program is now the ubiquitous choice for most listeners.

Non-Roon users can still easily access the network functionality and stream a host of services like Tidal, Qobuz and Deezer by using the mConnect Control app. This app also permits the attachment and control of a NAS or server via the front-panel USB port, to serve local files.

Tons of Class A

Looking through the top vents of the K-300i you can see a lot of heat sinking just under the surface. Krell’s devotion to high-bias Class A amplification over the years is well-known. The company’s first product was an eye-popping 100-watt pure Class A monster known as the KSA-100. Over the many years and countless products in Krell’s long history, patented innovations have come which aim to provide a system with Class A sound, while finding ways to keep the energy usage within reasonable limits.

The current (yuk, yuk) implementation is called iBias, and is something of an evolution in design of the “Sustained Plateau” bias strategy of early Krell designs. iBias may seem at first to be just another “sliding bias” style of output implementation, but it is in fact quite different.

Most other sliding bias approaches track the input levels and attempt to raise the output bias accordingly for brief periods of time. Yet other approaches might observe the operating temperature of the output transistors digitally in order to adjust bias. iBias instead follows the output current, which closely tracks with the user’s actual speaker load and listening level, and adjusts the current draw of the output transistors for short periods of time to ensure that the music is just about always residing in Class A.

In fact, the K-300i boasts up to 90 watts of Class A power before it switches to Class B, which is just an insane amount. As a side note, I once connected a true RMS meter (which, contrasted with a typical digital multimeter, is actually capable of measuring high frequency as well as low, in real time) to see how much power I was actually using at elevated volumes. In my system I found that ear damage was imminent with still less than 10 watts passing from the amp to speakers. YMMV, all systems are different, but to me, 90 watts of Class A means I’ll never be close to exiting the beloved amplifier topology. Truly, for almost everyone this is purely a Class A amplifier. 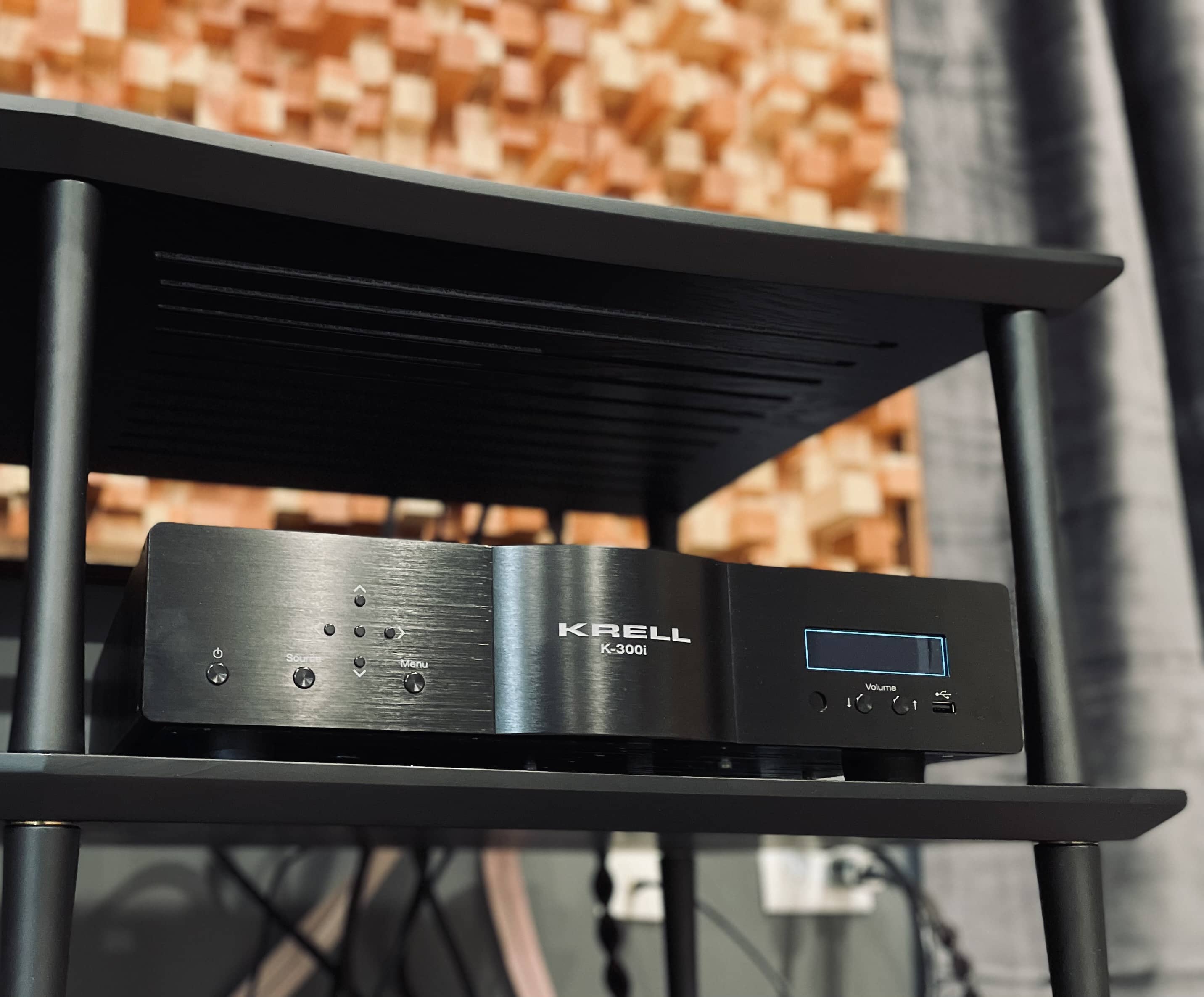 To pull off this feat, a power supply that is capable of almost 800 watts fills up much of the rest of the room in the chassis, and gives the K-300i its grunt-inducing physical weight. For a smaller amplifier, this thing is a true beast – both in heft and power output.

Rounding out the tech features for the K-300i is another new patented circuit called XD. While XD isn’t in the product name of the K-300i like it is in the rest of Krell’s amplifier lineup, the K-300i was actually the first product to receive this update. XD or “extended definition” works in conjunction with the hefty power output capabilities of this amplifier to better control loudspeaker woofers’ movement.

Generally, the lower the output impedance of an amplifier is, going into a relatively low-impedance load (speakers being commonly 4-16 Ohms), the better the tightness and accuracy of the bass response. Class D amplifiers typically have extremely low output impedance, so they are commonly used to power woofer sections of bi-amp-capable speakers. The problem with Class D however is the presence of FM distortion related to the product’s switching frequency, which does in fact affect the whole sonic spectrum. There is also a serious difference in the phase characteristics of a D amp in an otherwise A or A/B setup, which is what led Krell to develop XD. If the Class A approach can also deliver Class D-like output impedance, the listener enjoys the best of both worlds.

XD is a very clever method of lowering the output impedance to near Class D levels while preventing stability and transient issues that may arise in that arrangement. As a result, the K-300i powerhouse can both block a big lineman and make the fingertip catch.

How does it sound?

I should start by saying that I’m not generally an objectivist, “measurements-only” type of audiophile. As a longtime DIYer of speakers, I’ve found from experience that some poorly-measuring drivers can actually sound incredible. And I’ve witnessed small tube amps drive difficult loads beautifully that, on paper, they really have no business driving. I believe that measurements only tell a part of the story, and much education is required to properly interpret measurements and place them in the right context.

That all said, the measurements of the K-300i amplifier tell a story of an extremely linear, extraordinarily well-designed piece of equipment. In this case, the amplifier sound lives up to the high bar set by its measurements – it sounds just like it looks on paper.