While researching the histories of HiFi audio companies, a paradigm emerges of the solo genius starting an eventually prosperous company out of a garage. Time has proven that one audiophile with a unique vision, a work ethic, and the desire to compete can start a wave that eventually moves an entire industry.

Many hurdles lie between those garage days and the large companies that some of these similarly-founded brands become. Moving out of the garage requires bringing new people and new perspectives into the mix, and it would make sense that this element has as much to do with a manufacturer’s continued success as did the original vision. But once the founder hangs up his soldering iron and retires, sometimes the new leadership slowly dilutes the philosophies that made the company great

Benchmark Media Systems is not a story about the devolution of a HiFi dream after the loss of a founder, or a tale of a company whose rapid growth became its downfall. Quite the opposite. It’s a fantastic success story about a baton being passed seamlessly, and a company approaching 40 years in business with the same dogged devotion to fidelity that existed in the early days in the garage.

Allen H. Burdick started Benchmark Sound Company in his garage in Garland, Texas in 1983. Within two years he moved the growing brand to his childhood hometown of Syracuse, NY, where it remains to this day. The original customers were recording studios and television networks, with big demands for performance.

Alan Burdick’s early engineering built a name for him as an innovative designer pushing the state of the art forward. From those days to now, Benchmark’s brilliance has always been apparent in the pursuit of extreme measurables, or “benchmarks,” in audio design. 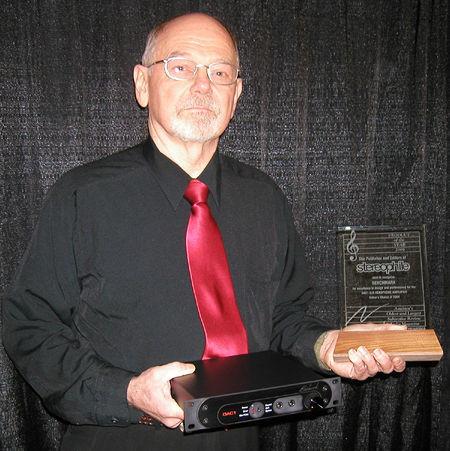 The first product Burdick produced set the stage for how the company would operate throughout the years. The DA101 distribution amplifier was built for a television studio and designed to power ten high-impedance loads, while withstanding shorts across a third of them at any time. This meant the amplifier was suitable for low-impedance speaker use (its low-ohm capability protected it against those shorts), and with a SNR of more than 130dB, a THD+N figure of .00044%, its measurables would be impressive, if not cutting-edge, for a HiFi amplifier in today’s market.

Burdick overbuilt the DA101, designing exceptional durability and load insensitivity into the design, and while measurements were very important to Burdick and Benchmark, listening was prioritized as well. Listening complemented the measurements, and as the TV stations wanted the best possible sound quality under tough conditions, many decisions were made in service of the sound.

In the DA101, Allen H. Burdick created an amplifier with ridiculous measurements and sound quality, setting a precedent with the very first product. The doors began to open to the mixture of pro audio and HiFi customers the brand still serves today.

Throughout the early years, Benchmark crafted products for various audio industry segments, and kept the production lines busy at the Syracuse factory. Microphone preamps of Burdick’s design began to gain in popularity, and the company focused more energy into the studio side of things.

All the while, AHB’s original DA101 served as the “benchmark” amplifier in the company’s critical listening area, having bested various challengers. The original design showed forward thinking and proper sense of priority that gave it incredible sonic traits, and it served as inspiration for the company’s current flagship amplifier, the AHB2.

Many products and much success later, Burdick did eventually retire from Benchmark in 2008 due to health reasons. But not before finding the hire of a lifetime in now VP and lead designer for the company, John Siau. Burdick built Benchmark from the ground up, but in John he found a like-minded leader who would carry on the work through the next decades. 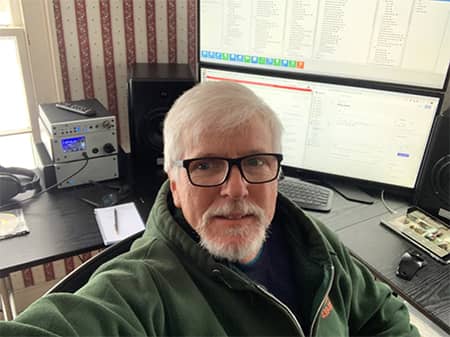 John started with Benchmark in 1995 doing contract work. Bringing years of experience in the still-nascent digital audio design field, he developed their first-ever analog-to-digital converter for studios, the AD2004.

Its 20 bits of resolution across 4 channels in the AD2004 made it an industry-leading device when it landed, and won it awards and brought in plenty of recognition for the brand. Before long, John closed his own consulting/design/manufacturing business and joined Benchmark for good in 1997.

John’s influence at Benchmark grew over the years, and he moved into a chief designer role. His major projects included many digital models like the DAC1, DAC1 Pre, ADC 1 A/D, DAC1 HDR and the well-regarded MP1A stereo microphone preamp. From the DAC1 to the current DAC3, the consumer-focused converters helped make Benchmark into a household name in audiophile circles.

But John’s prowess wasn’t restricted to the digital realm – the man could build an amplifier, too. It’s a misconception that DAC performance doesn’t lean heavily on the analog section, and many products like the popular MP1A served the pro audio market and featured plenty of analog circuitry. Siau’s analog chops had been proven throughout years, but he was soon to test his team’s skills on a new “benchmark” product.

In 2011, two years before Allen H. Burdick’s passing, John began work on the design of a foundational amplifier in the Benchmark lineup, something that would embody the philosophy (and, hopefully, the sound) of Burdick’s amazing DA101. The new project was tentatively named the PA1. The design objectives for the amp were lofty – complete elimination of the typical “crossover distortion” endemic to A/B amplifier designs was among the goals – and the team forged ahead.

Later that year, a serendipitous lunch meeting changed the course of the amplifier design completely. A couple of engineer friends from THX sat down with John and explained a theoretical amplifier design they had been working on. John shared about his own progress with the PA1, and all three realized their design objectives could be met if the two projects merged into one.

Benchmark offered quite a bit in this deal: Manufacturing, input stages, power supply, UI design, protection circuits, and more. THX offered the missing piece to John and Benchmark’s puzzle in a curious, newly-patented technology they were calling “feed forward” correction.

We don’t need to get too deep in the weeds here, but a very simplified analogy to the approach can be found in servo-controlled subwoofers. The output is compared to the input in real time, and the corrected signal is amplified. Where traditional feedback is performed with a simple loop and resistor, feed forward uses differential stages and a secondary amplifier to perform the task much faster, allowing it to catch the minute leading-edge transients that make up crossover distortion. 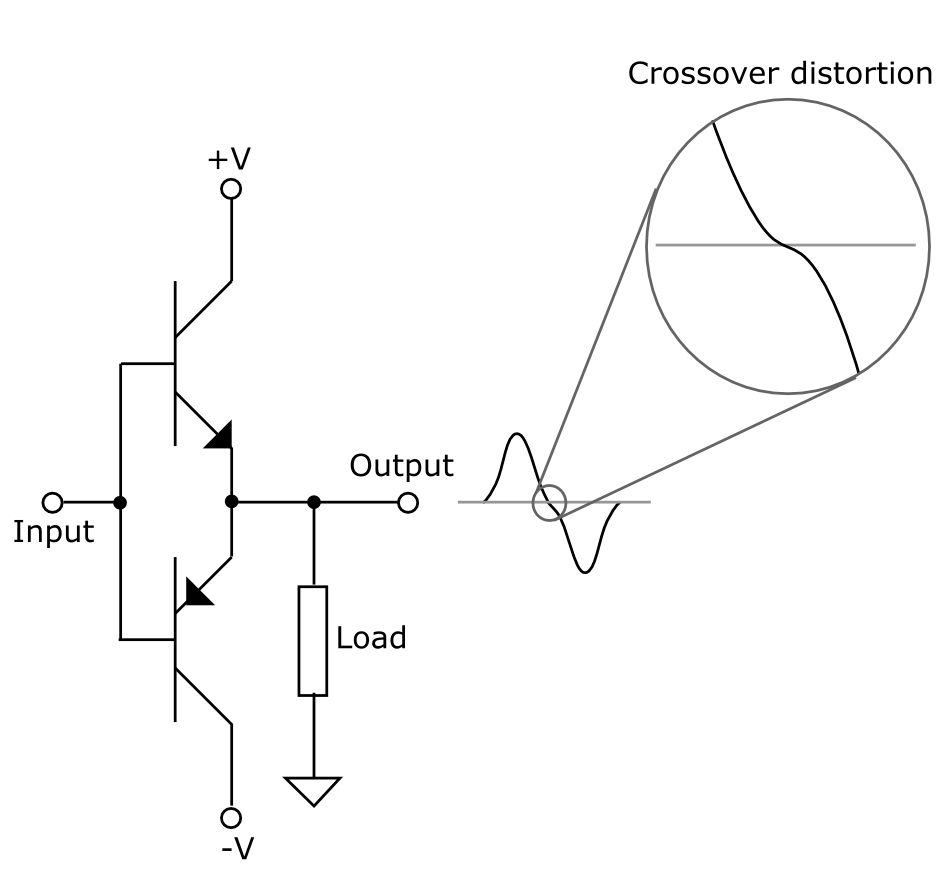 This, by the way, has nothing to do with a speaker’s crossover. Crossover distortion describes the transition in a push-pull amplifier as the wave rises above or dips below the zero voltage crossing. Picture a sine wave with a horizontal line running through it. Some tubes or transistors handle the sound above the line, and the others in the amplifier handle the bottom. When they hand off the signal to each other at that crossing line, typical designs kick out a tiny warble in the waveform, which Benchmark calls a transient.

And it certainly is transient, as in instantaneous and fleeting, because traditional feedback is not able to eliminate its presence.

In September of 2013, after a prototype dubbed “PA2” was working well and proving the technology, one to-do list task remained for Siau and the Benchmark team. PA2, as in Power Amp 2, may closely follow Benchmark’s traditional “no nonsense” naming convention, but in this case was not a very inspiring name for what would be the company’s crowning achievement in amplifier design.

The amplifier featured a class A input stage, class H variable power rails (more info on that can be found here), and a class A/B output stage. Then, it hit him. Allen H. Burdick, AHB. According to John, Allen would be so proud of the design accomplishments, it’s only fitting that the amplifier should be named after him, while also pointing to its trademark tech.

John tells the rest of the story via the Benchmark website: “I announced the name to my staff, and we placed the order for the printing. Less than an hour later we got a phone call with the sad and shocking news that Allen had passed away. I am still stunned when I think about the coincidence of these two events.”

Benchmark in the John Siau era is a living testament to the genius of its founder, and while the company has produced many different designs in recent years – each incredible and each tinged with the original Benchmark spirit – it’s the AHB2 amplifier that serves as the best illustration of the superb transition of leadership at the American HiFi company.

The AHB2 (the number 2 carried over from PA2) continues to serve as the flagship amplifier for the American brand, carrying the initials of the man who put Benchmark on the map, and containing the vision of the man who grabbed the baton.

Their DACs, preamp and amplifier present some of the lowest noise-floor specs in the entire industry. Converters use clever technology to avoid common problems, just like the AHB2 amplifier. But this AHB2 is another level of achievement, one that exemplifies all that is good going on over at Benchmark.

The brand’s original vision is still intact, the company is in great hands, and the audio world awaits what might come next from John and the gang in Syracuse. No doubt some sort of new benchmark will be attempted, and we have zero doubts it will be met.

Talk to one of our knowledgeable sales team today about Benchmark Media Systems products, and remember you can get serious savings off the new products when you trade us your older audio gear.