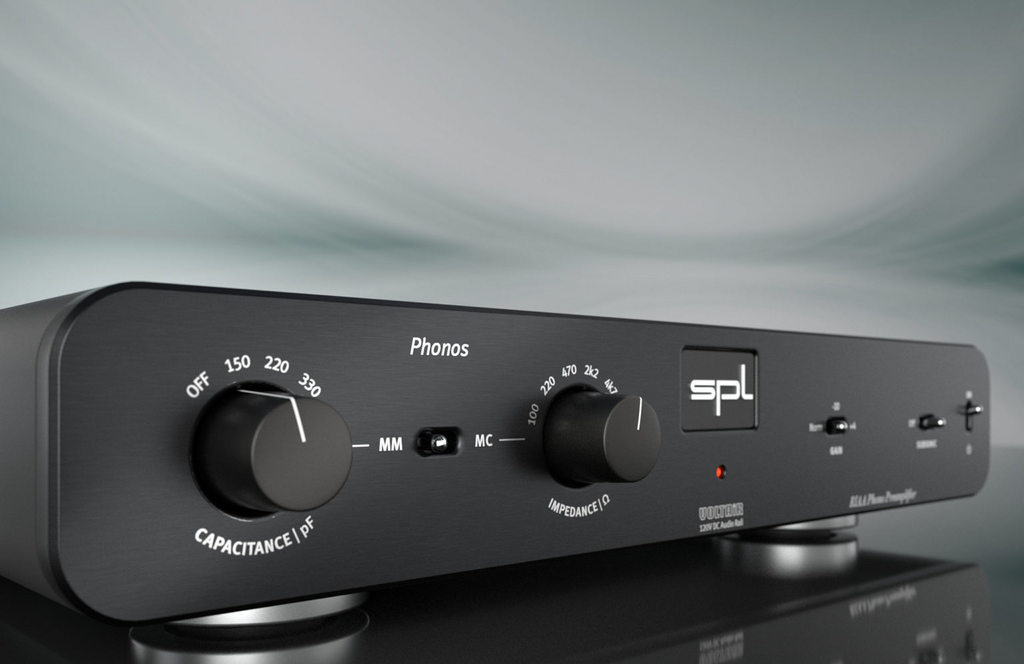 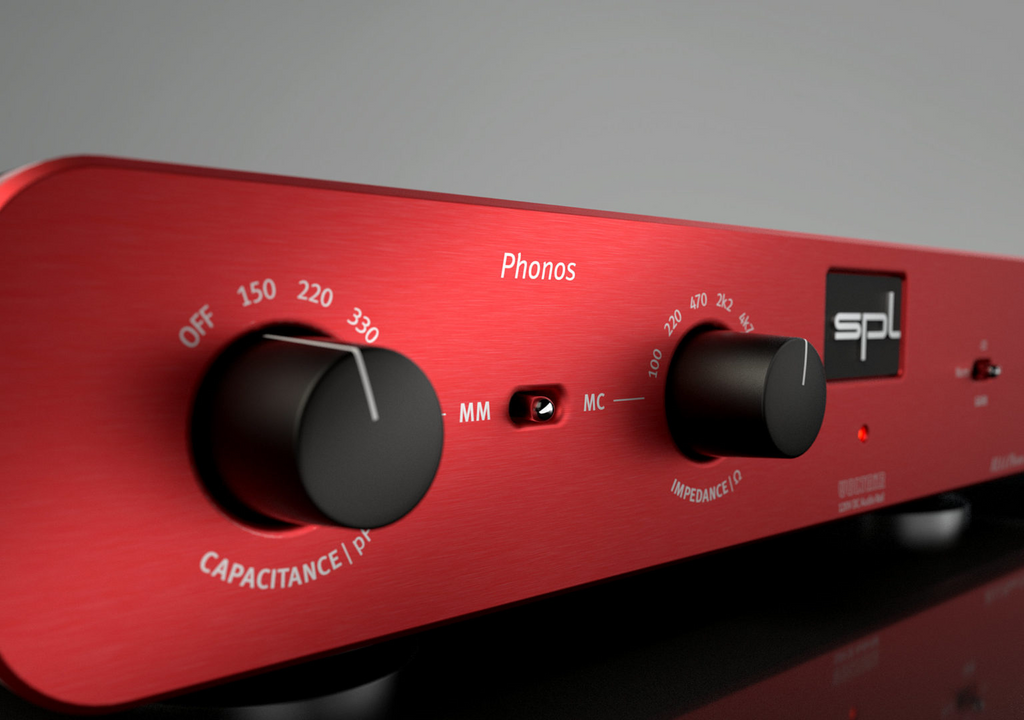 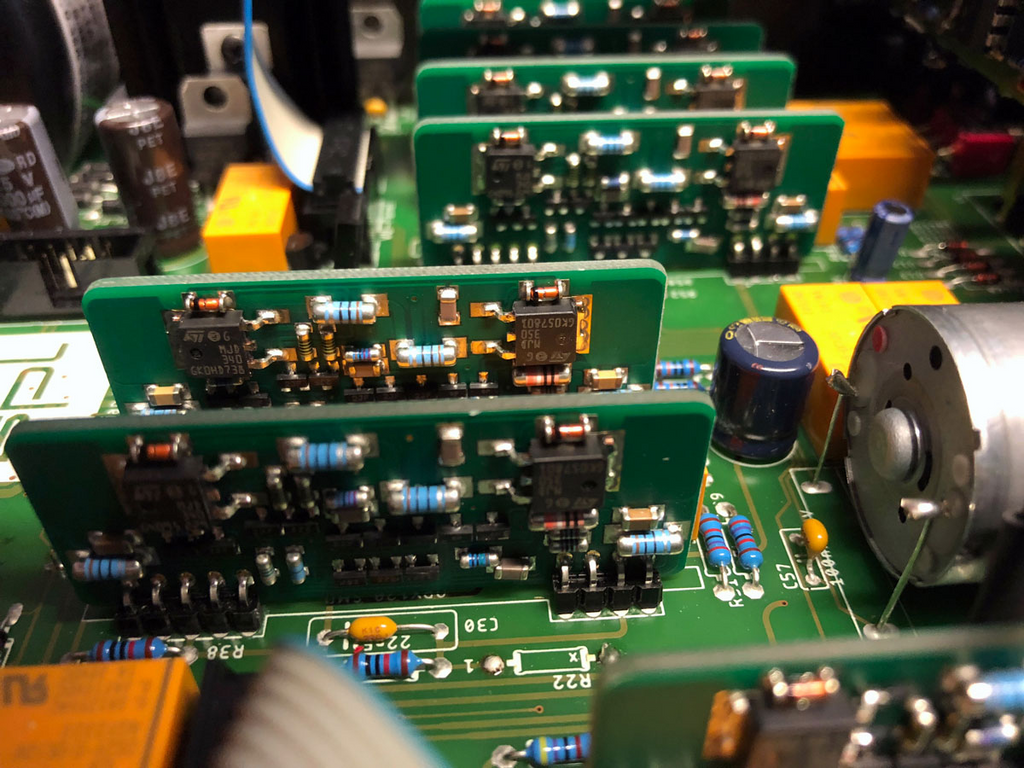 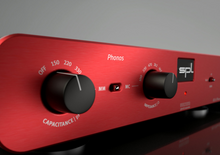 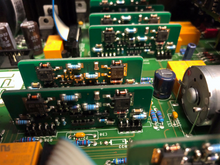 Phonos
RIAA Phono Preamplifier
This phono preamplifier for Moving Magnet (MM) and Moving Coil (MC) pickup systems is based on the legendary Douglas-Self-Design.

Moving Magnet
Moving magnet pickups generate a small voltage by moving a magnet between copper coils. MM pickups have a very high inductance and impedance.
The Phonos offers a choice of three capacitors to correct the linearity of the frequency and phase response. The capacitances are 150pF, 220pF and 330pF. In the off-position the capacitance is determined by the capacitance of the cable.

Moving Coil
The MC pickup is also a small electromagnetic generator, but with the magnets firmly anchored and the coils moving between them, i.e. exactly the opposite of the MM pickup.
The output voltage, however, is very low at only a few hundred microvolts and is therefore more sensitive to noise and induced hum. This makes preamplifier design a challenge, because the very low output voltage must be pre-amplified extremely noise-free. Phonos offers one of the most powerful phono preamplifiers for MC systems with up to 71.5 dB preamplification. Thanks to the 120V technology, the preamplifiers are extremely low-noise, linear and phase-locked.
MC pickups have a very low inductance and impedance. This means that the effects of cable capacitance (from turntable to preamplifier) are negligible. The impedance, however, is relevant and can be set in six positions: 100, 220, 470, 2.2 k, 4.7 k, and 10 kOhm. If there is any doubt as to which impedance matches that of the pickup, the impedances can also simply be switched through until the linear frequency response is acoustically determined.

Amplification
The pre-amplification can be switched in three values. The normal gain value is +46 dB for MM and +67 dB for MC cartridges.
In the -10 dB position, the phono produces enough output level for normal hi-fi equipment operating at a reference level of -10 dBV.
In the +4 dB position, the output level is about as loud as that of modern DA converters at a reference level of 0dBfs = +15 dBu.

Subsonic Filter
The rumbling of the turntable’s drive mechanism is also amplified by the high amplification of the bass range due to RIAA equalization in playback. The Phonos offers a switchable subsonic filter to remove this rumble.

Connections
Gold-plated RCA sockets are available for connecting the turntable and for outputting to a preamplifier such as the Director Mk2 or the Elector.
A ground connection for the turntable is designed as banana plug socket. The ground lead can be either clamped or plugged in.

During playback, exactly the opposite happens in the phono. The de-emphasis filter (red RIAA curve) compensates for the pre-emphasis and the result is a linear frequency response.

Douglas Self Design
The RIAA equalization of the phono was developed according to the recommendations of Douglas Self.
Idea: Many small capacities instead of a few large capacities.
Advantages: The capacitors charge and discharge faster, which results in better resolution and faster impulse response.
Only audiophile Styroflex capacitors are used in the entire RIAA equalizer.
About the person: Douglas Self is a British electronics engineer with a strong penchant for audio. He holds honorary degrees from Cambridge University and teaches psychoacoustics at the University of Sussex.