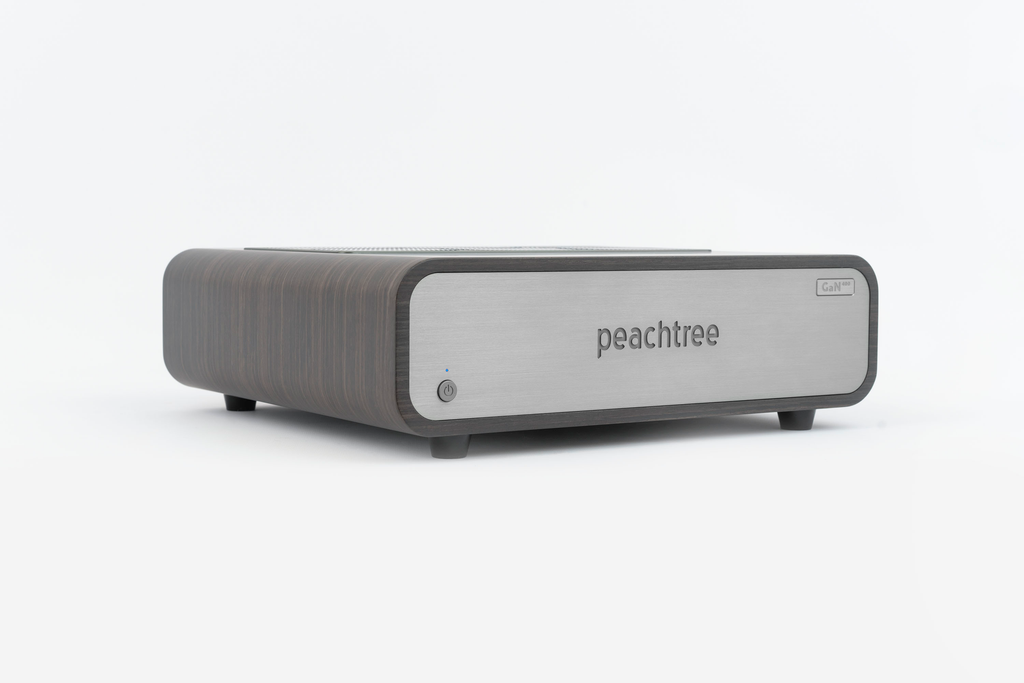 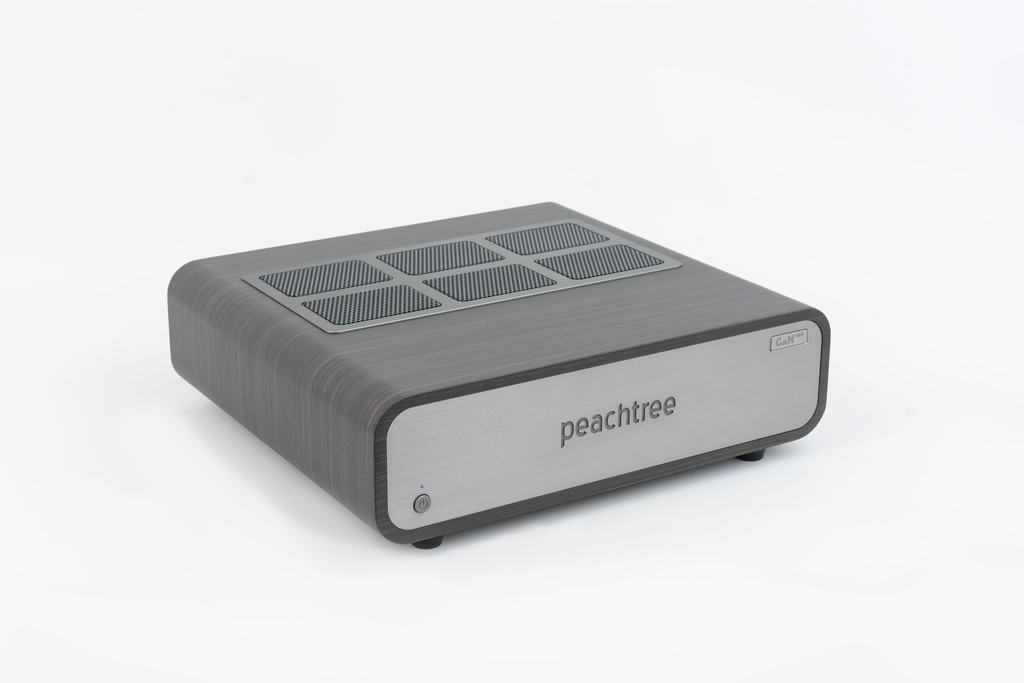 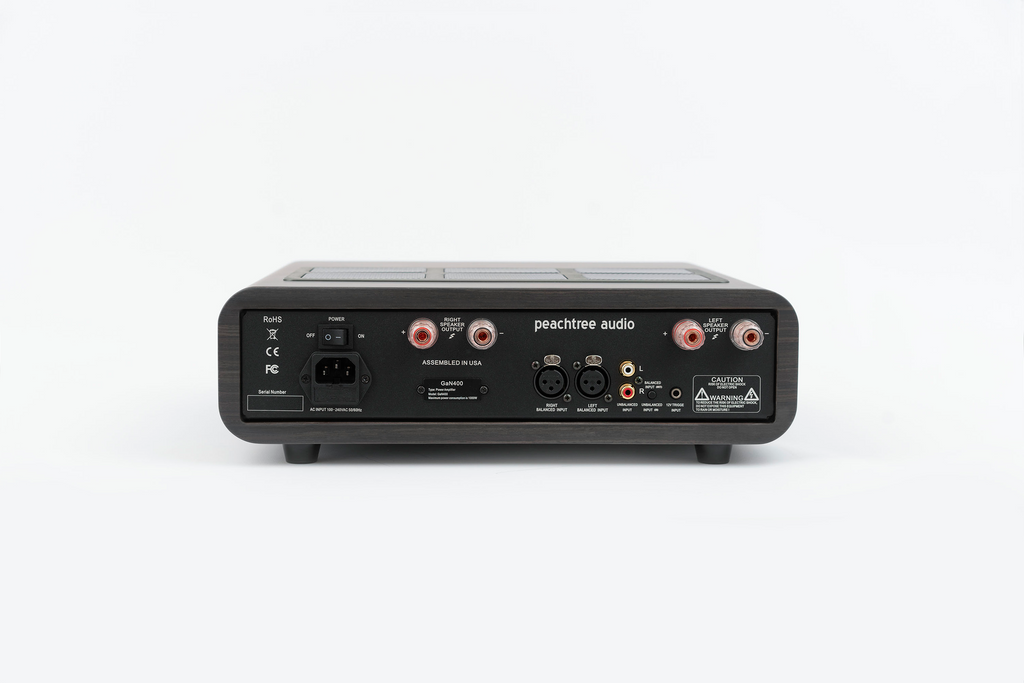 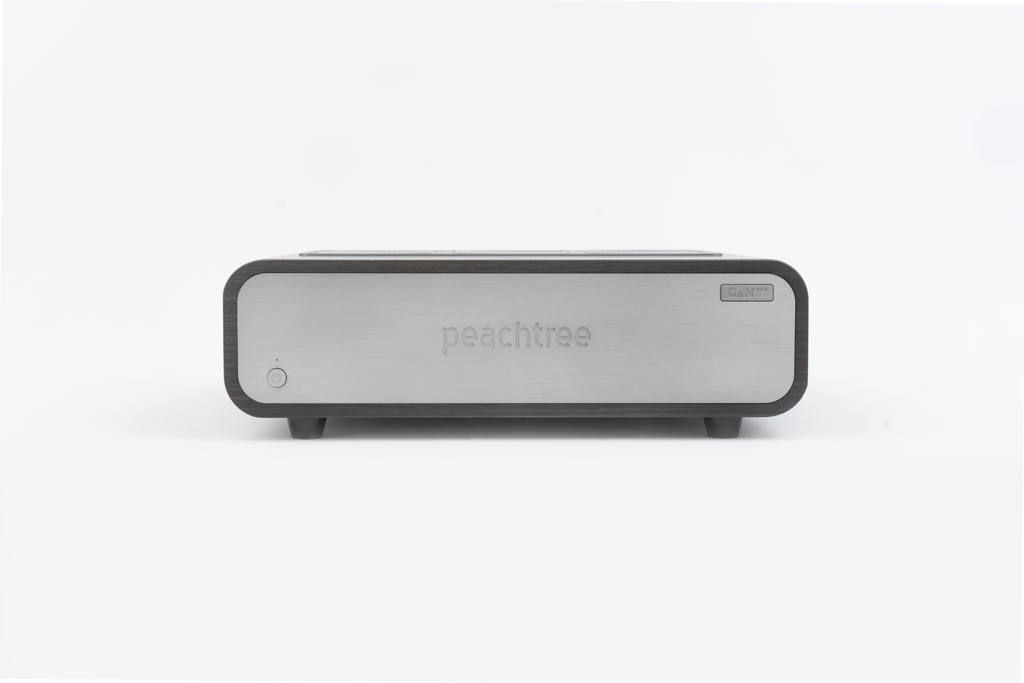 Technology advances the state-of-the-art in the GaN400
The Peachtree GaN400 represents a next step in the evolution of power amplifier design and manufacturing. It has exceptionally accurate waveform reproduction, amazing power and control, low global negative feedback and extremely efficient use of AC power. It provides the highest level of musicality without sacrificing the remarkable efficiency of a class-D design, and is proudly assembled in the USA. The GaN400 is simply the best sounding power amplifier we have ever made and compares favorably to the world's best power amplifiers regardless of their topology.


The GaN400 is a “class-D” stereo power amplifier that utilizes GaNFETs (Gallium Nitride Field-Effect Transistors), an 850-watt RMS regulated power supply, a fully balanced topology and a low global negative feedback design to achieve an astounding 400 watts-per-channel while achieving sound quality that is remarkably faithful to the input signal. It has balanced and unbalanced audio inputs, a trigger input, and is compatible with speakers that have nominal impedances from 2.5Ω to 16Ω. The GaN400 drives virtually any speakers, including low sensitivity (“less efficient”) speakers with the utmost ease and authority, while delivering a level of musicality and transparency that is extremely rare, especially in high output power amplifiers.

What is GaN?
The GaN400 achieves new levels of performance and efficiency by utilizing GaNFETs instead of MOSFETs (Metal-Oxide-Semiconductor Field-Effect Transistors) that have been the industry standard for more than 50 years. MOSFETs revolutionized the electronics industry in the second half of the 20th century and have become the most common transistor in electronics and the most widely used semiconductor device in the world! Their significance in the electronics industry and the other industries that rely on them can’t be understated. However, over the years, the rate of MOSFET improvements leveled off as the performance got closer and closer to the theoretical limits of the materials and processes. The need for something better grew. Enter GaN.

GaNFETs started to gain attention over the last decade as audio engineers and designers realized that they were suitable for high frequency, high voltage, high temperature and high efficiency applications especially when compared to their MOSFET counterparts. GaNFETs turned-on ~4 times faster and turned-off ~2 times faster reducing switching distortion (ringing) by several orders of magnitude. This, in-turn, allowed designers to use much less global negative feedback to achieve excellent measured results. The result is an amplifier with exceptional musicality and excellent measured performance. In other words, an amplifier that provides wonderfully natural sounding music reproduction like the best tube amplifiers, yet retains the tight bass, extended frequency response and sheer dynamics of the best solid- state amplifiers. It really is the best of both worlds and all of this is accomplished in an amplifier that is also one of the most efficient designs in the market today converting ~96% of the electricity from the wall into usable power.

The Importance of the Power Supply
Every power amplifier is dependent on its power supply to provide the power reserves necessary to drive the loudspeakers at any volume level. The GaN400 is no different and it utilizes an impressive 850-watt RMS regulated power supply. This supplies the output modules with all the clean power they will ever need - even when things get really loud. The power supply uses the best parts available to ensure high performance, durability and long-term reliability.

Connectivity and Convenience
Balanced and unbalanced inputs assure you of maximum low-noise performance and compatibility with any preamp. The GaN400's 100K input impedance means you can use the preamplifier of your choice - regardless of its technology - with assurance that it will not be compromised. The GaN400's remote trigger lets you conveniently power the amplifier on and off with one command.

Compatibility
You'll never have to worry about the GaN400 matching up with your speakers! It has the power to recreate the dynamics of any recording with virtually any loudspeaker made. Nominal load impedances from 2.5-16 ohms are handled easily. Sit back, let the GaN400 power your speakers and ENJOY THE MUSIC!