When we think about restoring a classic car, there’s an adage that’s often brought up that says “They don’t make them like they used to.” With all the modern advancements in fuel delivery and torque as well as improvements in handling, the modern driving experience by all metrics is better than ever. Add to that the development of electric vehicles and their increased range, and even the breakthrough ability of Tesla’s Plaid to continue accelerating well past 100 miles an hour, the performance of modern vehicles tends to leave the old beloved vintage muscle cars in the dust. But there’s just something about the glorious cars from the '60s and '70s that is alluring, and worth the effort to reclaim.

Which brings us to the story du jour. The Music Room recently undertook a very interesting full restoration project for a customer who wanted to resurrect the “vintage magic” of a very interesting pair of used McIntosh MC60 monoblock tube amplifiers. As I get into the story, you’ll see it wasn’t as clear cut as some vintage car rebuilds can be. But for this customer, purity and originality was the goal, and like a vintage car enthusiast, he wanted all care taken to reclaim the old glory.

When restoring a classic, there's usually no question when it comes to whether the restoration should contain period-specific or period-appropriate parts, or whether some of the design should be modernized. Purists would gasp at the idea of putting a highly efficient modern 1.8-liter engine into an old Charger, even if it might offer some extra oomph in certain situations.

The story is not always as cut and dry when it comes to restoring older HiFi audio gear. I’ve done a bit of restoration work myself, and chose specifically to modernize my beloved 30-year-old Audio Research all-tube amp. But that was a personal choice to try to use the strengths of the circuit and go in a more neutral and transparent direction. I didn’t go too crazy; my updates were more or less following the direction that Audio Research has taken over the years since in their reference-level products. 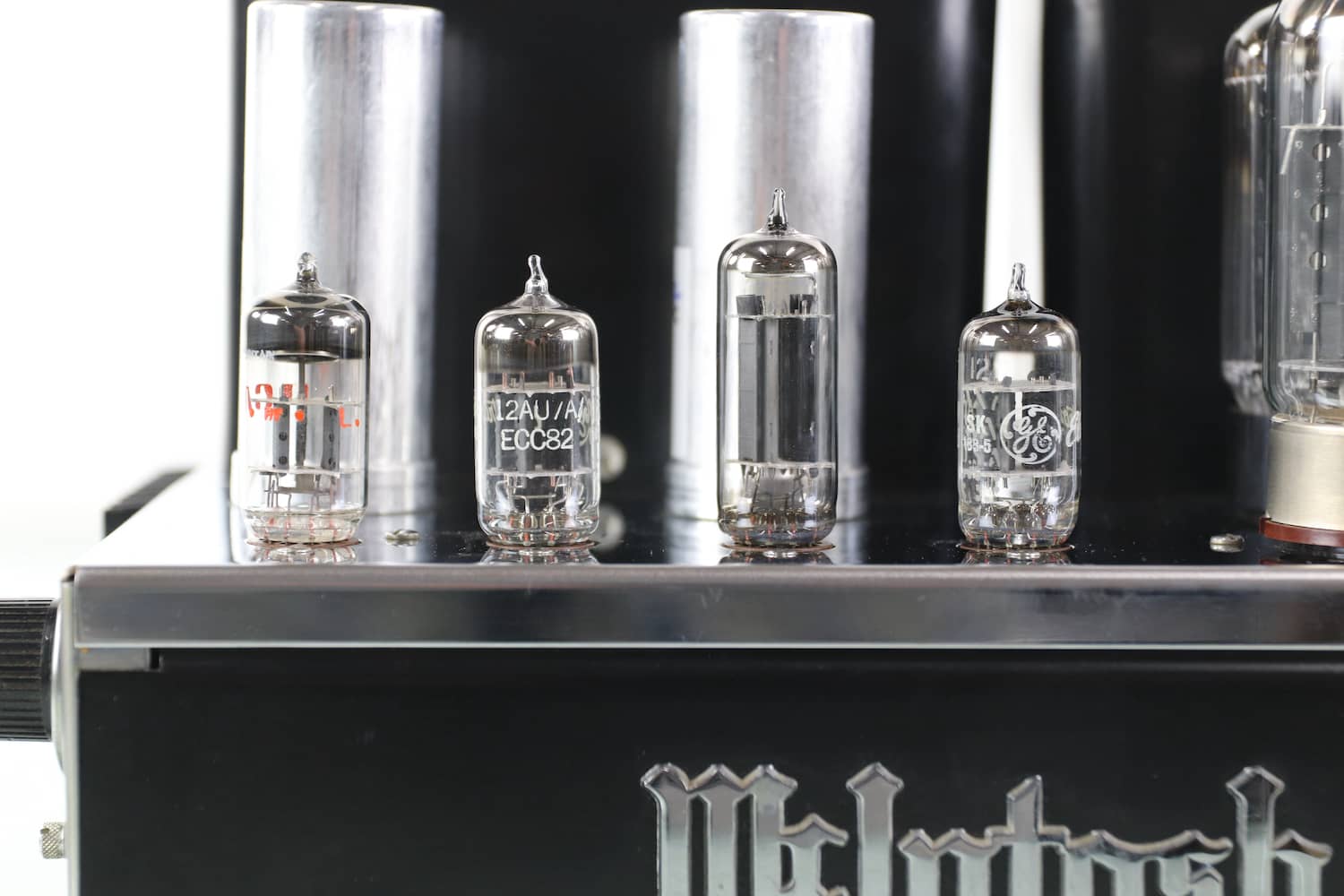 But that’s not something that everyone wants. Many who travel the path of vintage restoration in audio feel the same way the car guys do and want to capture the original magic that made those products so famous to begin with. There are even a number of new brands whose entire aim is to bring back the glory of old, like the British company English Acoustics and its modern tube offerings that bring back heralded designs from long ago.

Speaking of tubes, that is generally what we’re talking about on the subject of HiFi restoration. At one point, the brightest minds in the business were hard at work designing and innovating the very best applications of tube amplifiers, preamplifiers, and tuners. There are good reasons those designs still sound excellent today, when fully working. But now being so far removed from that heyday, the first job of an audiophile seeking to restore vintage tube gear is to find the appropriate expertise that can help them make and execute the right moves to recapture that warmth and bloom from the tube gear of old.

One of the things I think folks don’t quite get until they’re into it, and can learn from someone with vintage circuit experience, is that the tubes themselves are not fully responsible for the classic “warmth” or holographic bloom associated with vintage gear. Much of that actually comes down to period capacitors and resistors, and specifically the widespread use of “carbon composition” resistors throughout these circuits. 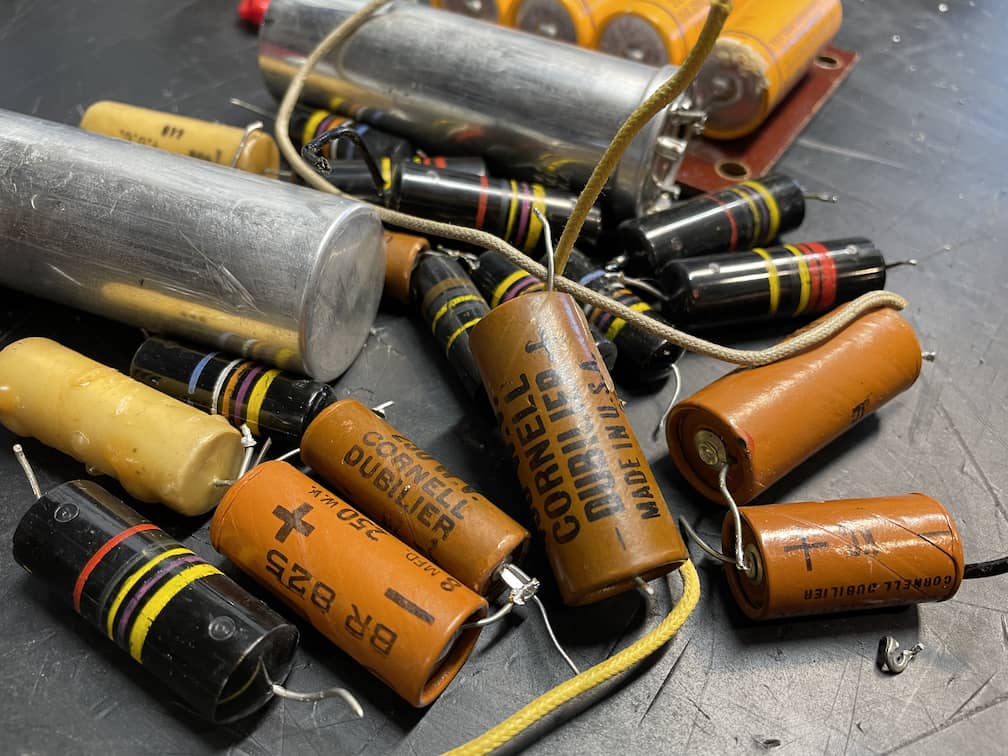 Long-lived brands like McIntosh and Audio Research got their start and set many of the standards in the tube era, but then moved on to full solid-state production following transistor innovations. Only later did they return to making pure tube gear, as well as transistor-based equipment, to complete their catalog offerings for all tastes. These companies with a long life and lots of innovation learned that looking backward to cherry-pick the most effective design philosophies from the past was a great idea. However, these days most everyone has moved away from using carbon comp resistors throughout their circuits. Almost no one makes them anymore, and they’re quite expensive to procure relative to the massive selection of excellent new resistors available. But for vintage gear, the sound character these impart is really tied to that lovely, yet not as neutral, vintage sonic “glow.” 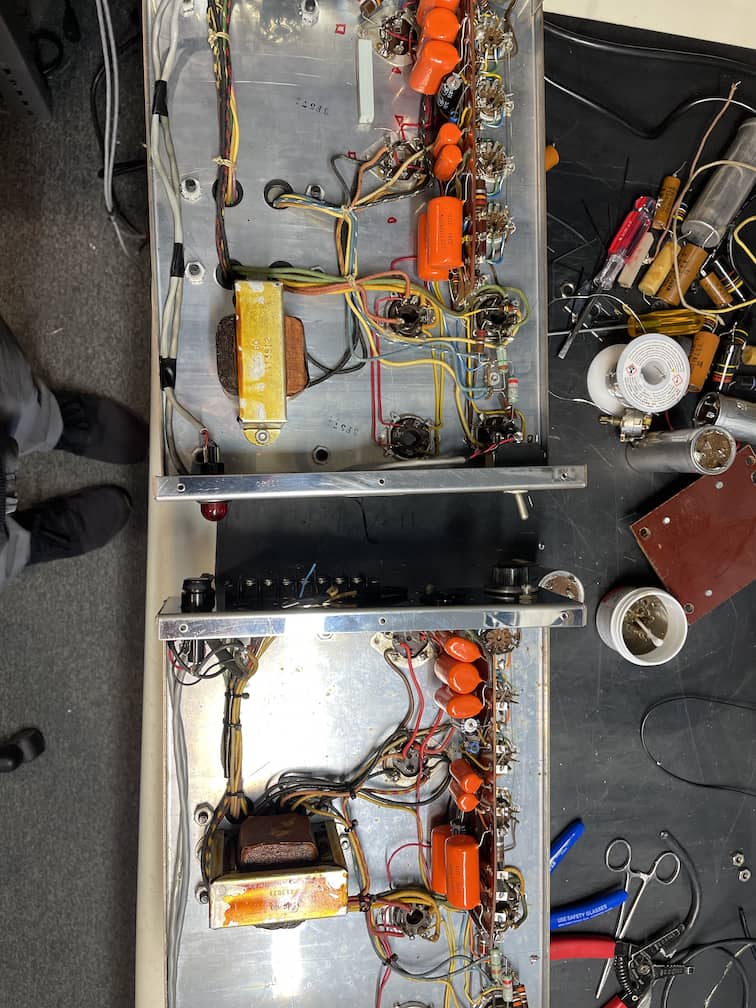 So when someone is thinking about updating or repairing a piece of tube gear, the questions that come up are: “Do I want to modernize the resistors?” Or “Do I want to go period, and keep it honest to the original design?” That’s a personal choice, which comes down to what the owner of a restoration project wants.

The best thing that one can do as a restorer is to clearly explain this and offer that decision to the person that’s going to have the tube gear and is going to enjoy the listening experiences. In this case, the customer wanted to keep the MC60s original or only very lightly modernized if full originality wasn’t possible, and it seemed like a great decision.

It all began with a phone call. As we are a certified McIntosh repair center, the customer on the line told us that he’d come across a beat up and modified pair of MC60 amplifiers, one non-working. We learned that to his eyes, the modifications were pretty significant. One had an older serial number, and the other had a newer serial by about four years, so they were never originally a pair. You can imagine that the guy got them for a great deal.

As a McIntosh repair center, we have access to documents and schematics going back into McIntosh’s long lineage, and we decided that this was a project we could pull off.

Now, six months to a year ago, we might not have been able to take this project on, because the repair center at The Music Room is often very busy (which is just part of doing business and effectively selling used hifi gear). There is so much from HiFi’s past that folks want to get into, and there are a lot of elements of these pieces that don’t stand up well against the test of time. As a result, our repair department is often quite busy.

But one of the greatest things that we were able to do in the last year was hire a very experienced and very capable technician named Jason. When he arrived, Jason looked at our backlog of repairs, which was absolutely massive, and he plowed through them in relatively no time at all. I mean he just demolished it. 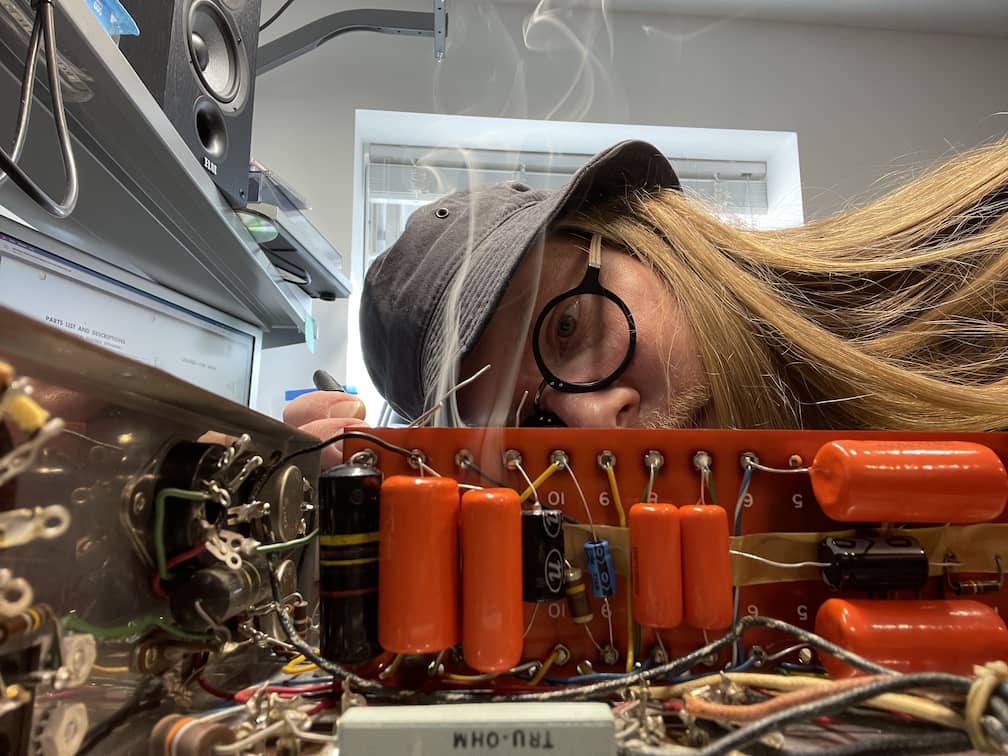 So looking for new projects for Jason, we began to consider work just like this. We’d been approached for restoration work often before, but this time it was an easy ‘yes’, knowing Jason could really dig into it.

The customer brought the amps down from Idaho, and when he made the drive he actually arrived sooner than he’d planned. Because it was warm (it’s zero degrees as I write this, but this fall and winter has been quite temperate and nice here), he camped out and waited for us to open.

Once open for business, we had our first look at these things. Immediately, it appeared that it was going to be quite a job. They were dirty, had a real hodgepodge of tubes (including one whose glass was deformed – more on that in a moment), and the modifications had a sense of hurriedness and “slapdashery” to their appearance. 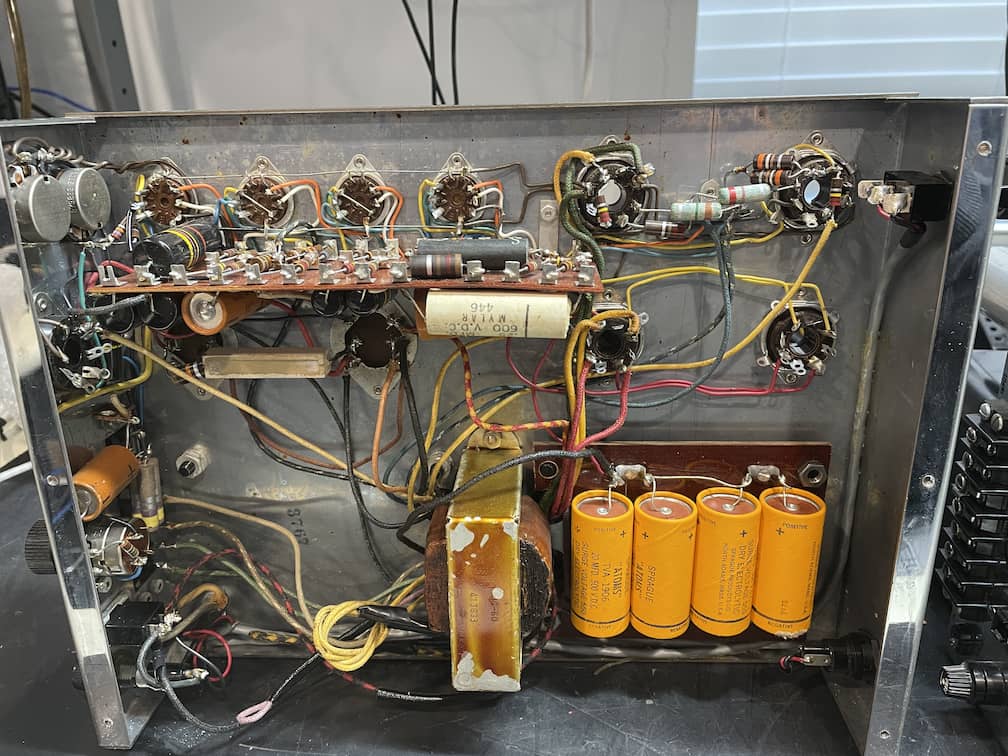 With the exception of the added switch and light (the main mods visible from the outside), the older amp was closer to its original form. Original MC60s didn't have a power switch- you just plug them in and they go on. This can be a little nerve wracking for modern owners, given that it’s a mono power tube amp that you’d not want to leave on unless listening.

Internally though, the wiring was actually in great shape and looked reasonable. Jason still planned to test everything and replace capacitors and other parts that needed refreshment, but the older amplifier’s appearance was encouraging. 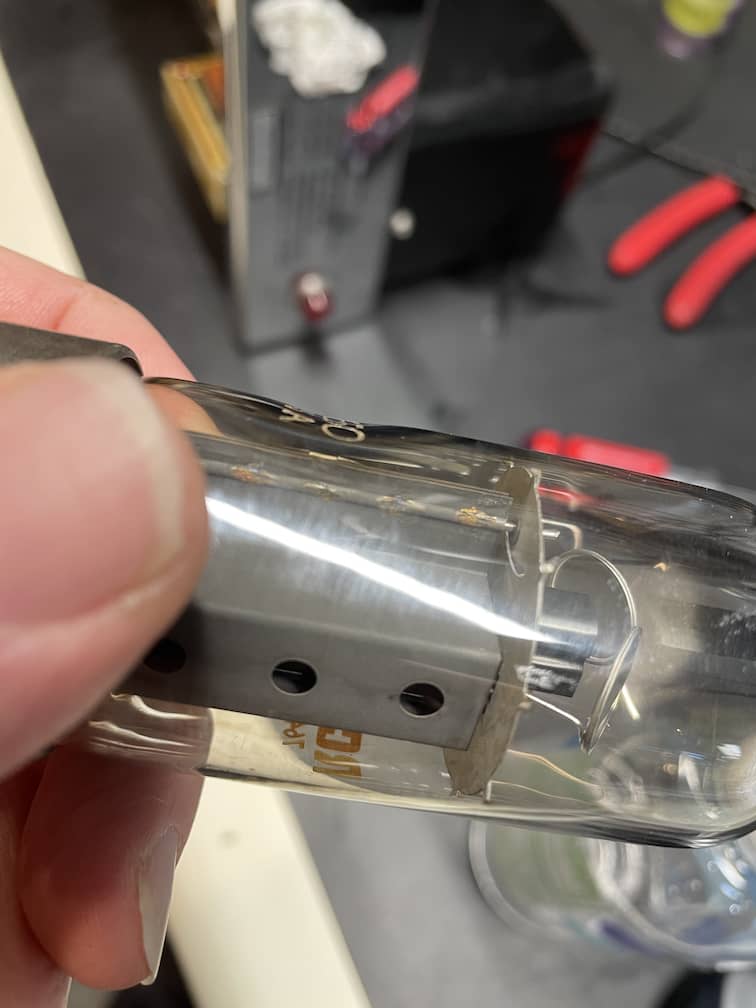 The newer one? Not so much. Take a look at the photo to the right here, which shows where the glass of one tube actually deformed from excessive heat. To a trained eye like Jason’s, this could mean only one thing – constant “red-plating” of the tube over a period of time. Other mods to this amp included a variable control to adjust the negative feedback around the amp, and removal of the original octal socket that would be used with a preamplifier of the era.

For most tube amps, the red-plated and abused tube might have spelled disaster for the output transformer. But to Jason’s surprise, the overbuilt and exceptionally durable McIntosh transformers in the amps actually were perfectly fine – a testament to the build quality of perhaps the world’s most beloved and well-known HiFi amp maker of all time.

Inside the newer amp, the picture wasn’t much better, and the story was told of why the tube was red-plating so much. Whoever modified this one in the past had done a very poor job, soldering poorly throughout, leaving cables un-routed and loose, and actually wiring the transformer out of phase, which effectively caused it to work against itself whenever it was on. Jason and Peter, TMR’s repair department director, didn’t even want to power this amp up without doing a lot of repairs first.

This is getting really long-winded, so I’ll just skip to the good part, and show a bunch of photos of the restoration. The choice was made to use Cornell Dubilier “orange drop” coupling capacitors and keep the carbon composition resistors to maintain its sonic character. Given the differences between the two, Jason had to reach into our secret stash of NOS Carbon comps to get both of these amplifiers to the same specifications. He even matched them closely to reduce distortion to absolute minimal levels, which is something the original McIntosh engineers would have appreciated. Naturally, every electrolytic capacitor in each amp had to be replaced, which is a given for any tube equipment of this age.

The chassis were cleaned up, many of the mods removed, new tubes installed, and after a couple weeks of soldering, pulling and replacing things, Jason had them measuring nearly identical to one another and sounding spectacular.

The variable feedback knob was removed on the newer amp, and an original octal socket was returned to its location and reconnected. This was done in case the customer wanted this option in the future and to complete the job of making these amps identical. 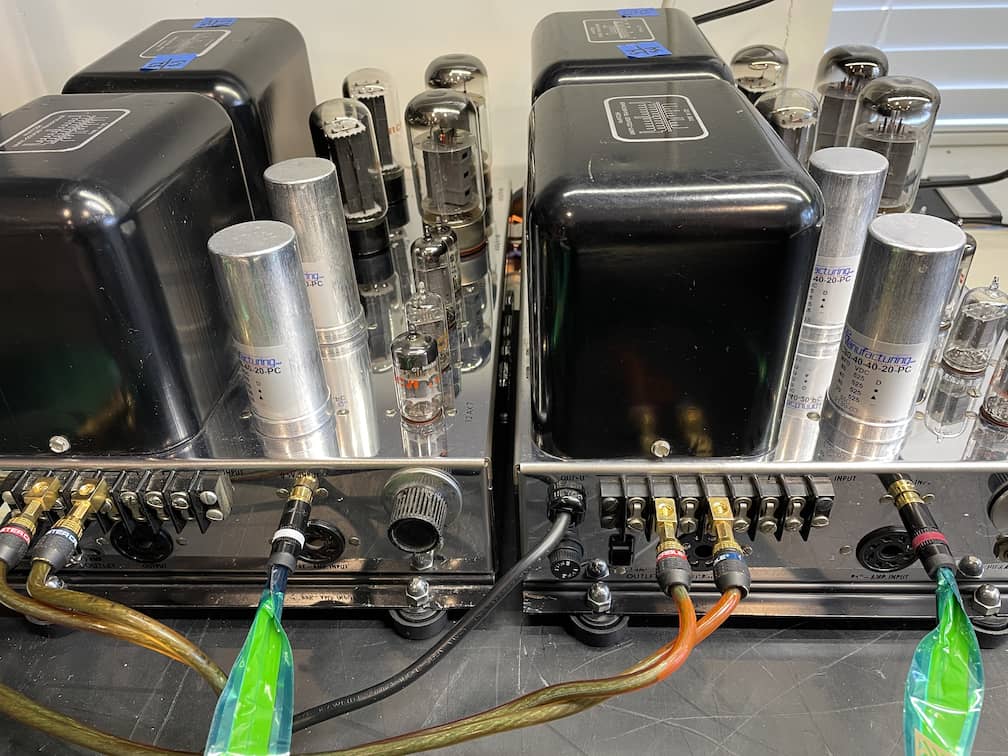 After letting the new components warm up and burn in for some time, Jason couldn’t get over how lush the midrange and captivating the sound was from these vintage beauties. There was no doubt that the customer would fall in love with these, and there was no other way to get there besides some know-how and good old fashioned elbow grease.

That’s how this story ends. If you’re reading this and wondering about the possibility of a restoration like this, The Music Room may be a fantastic place to inquire. You can leave us a message via the Contact Us page of our website, or reach out like this customer did to our phone line at 720-336-8742. 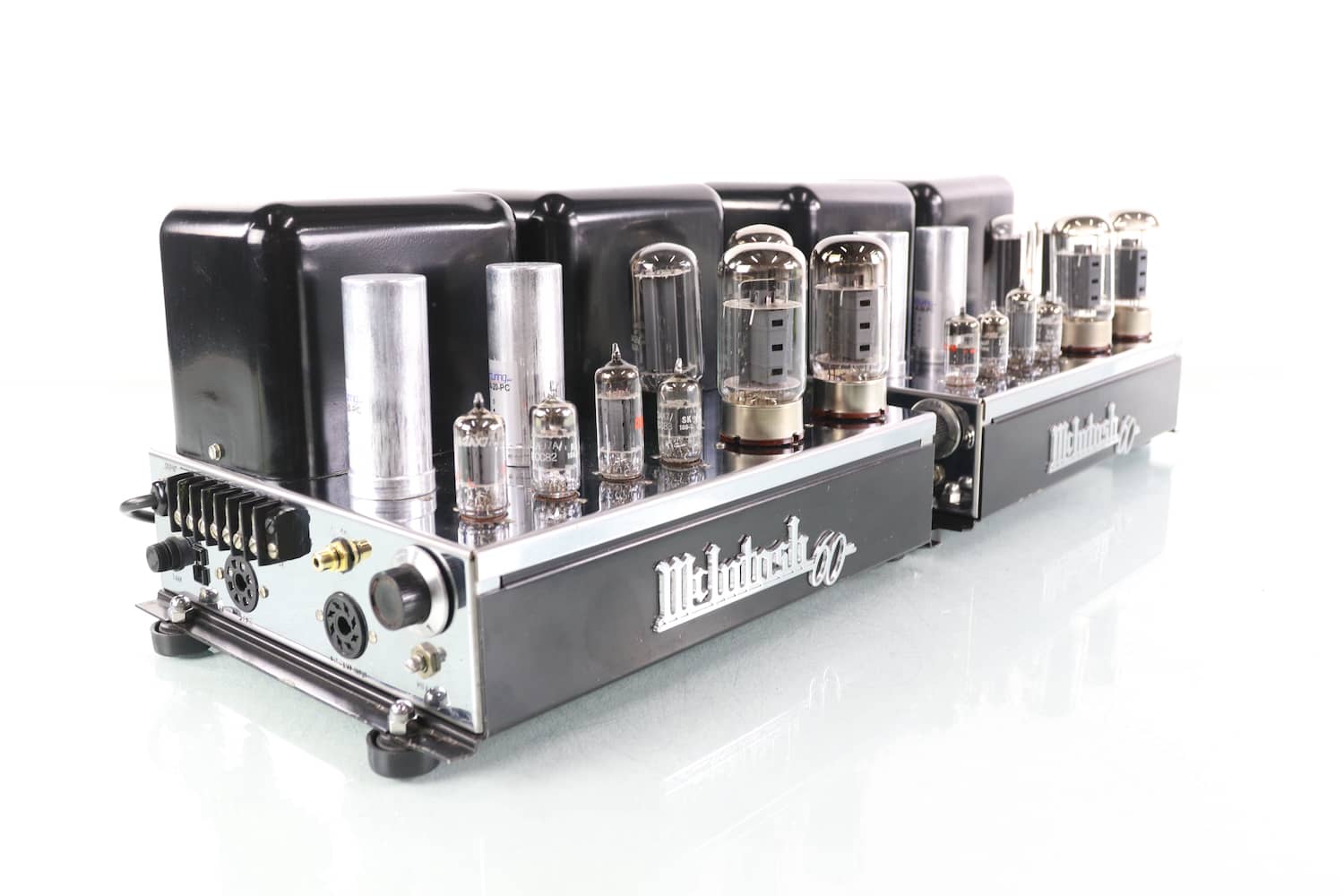 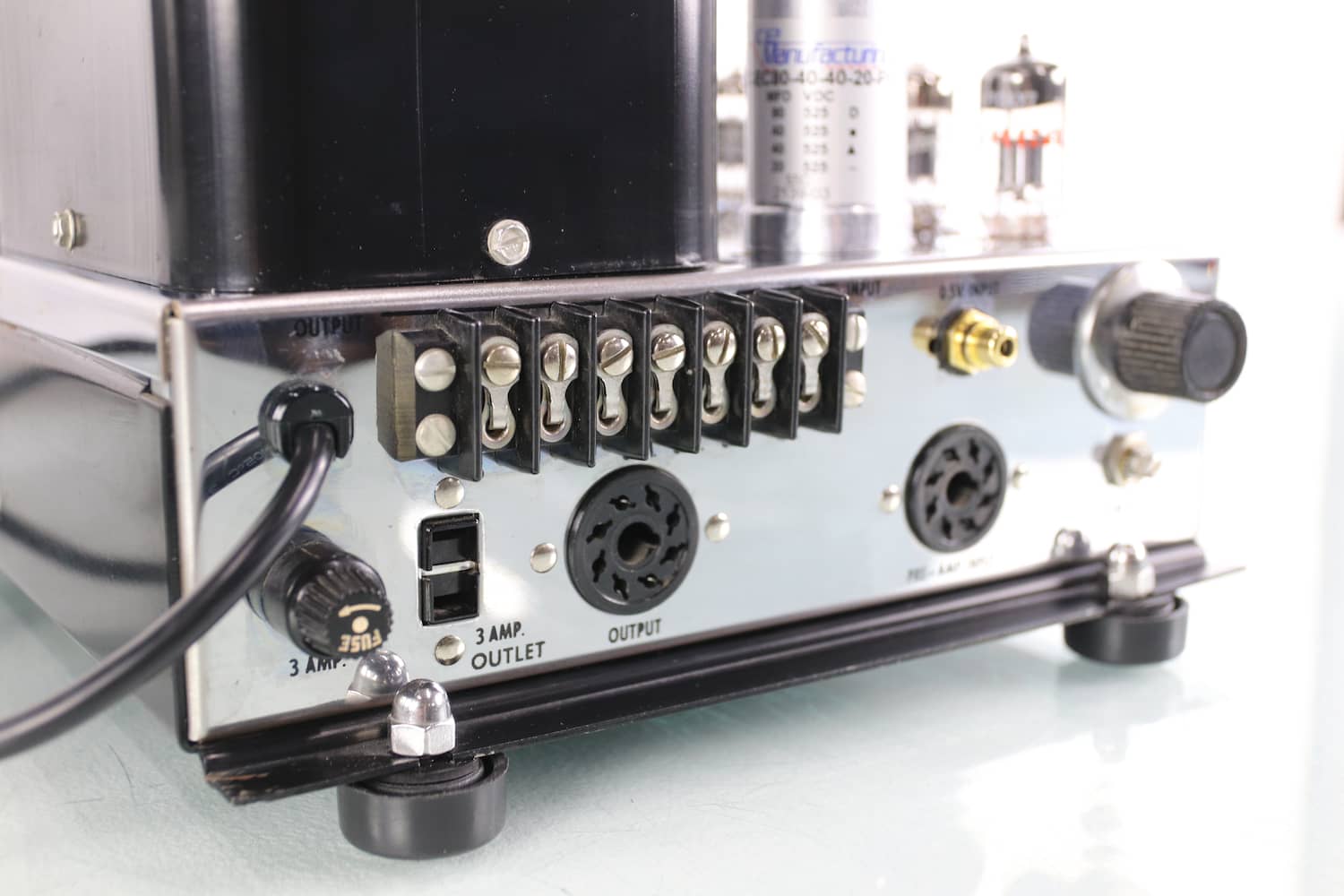 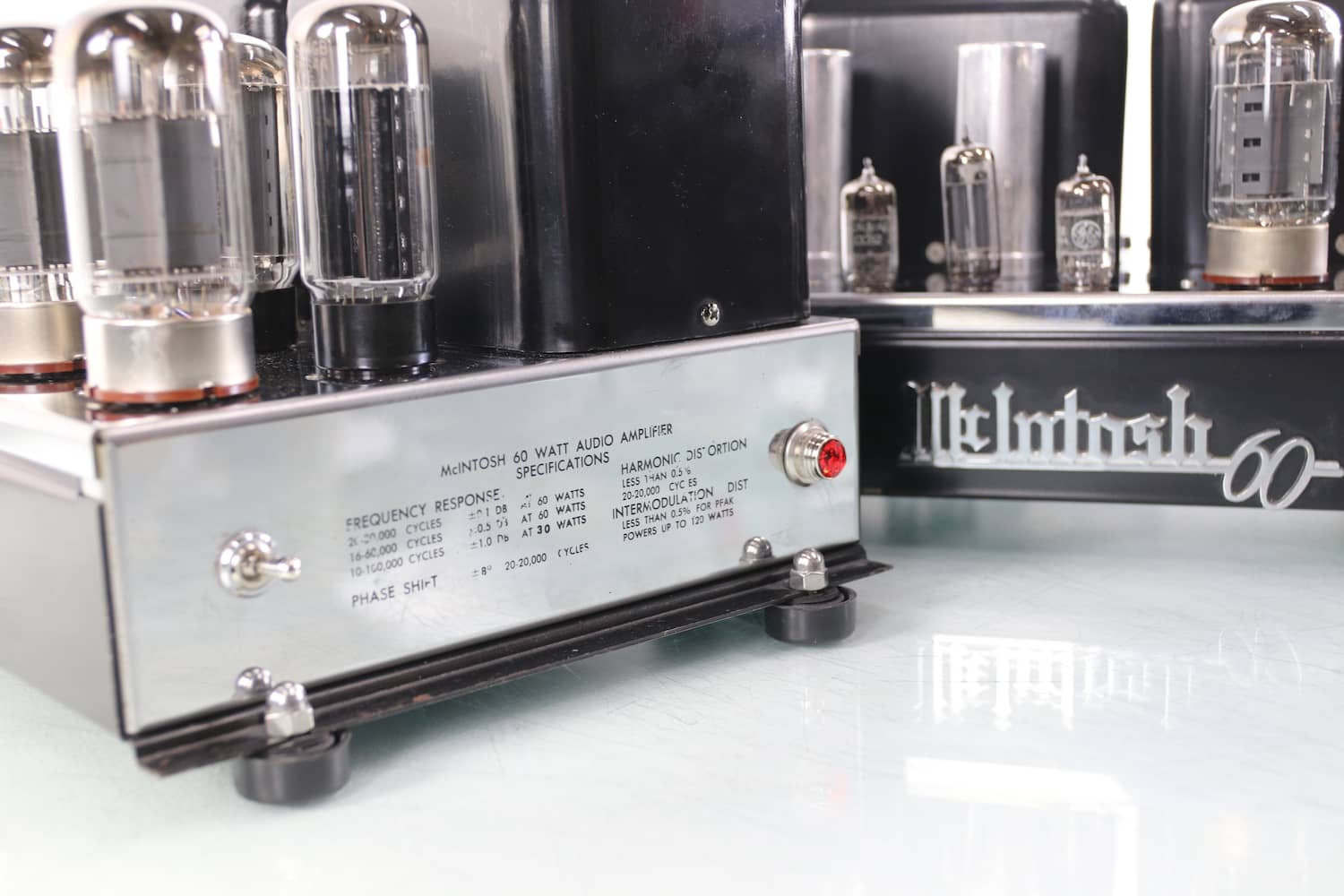 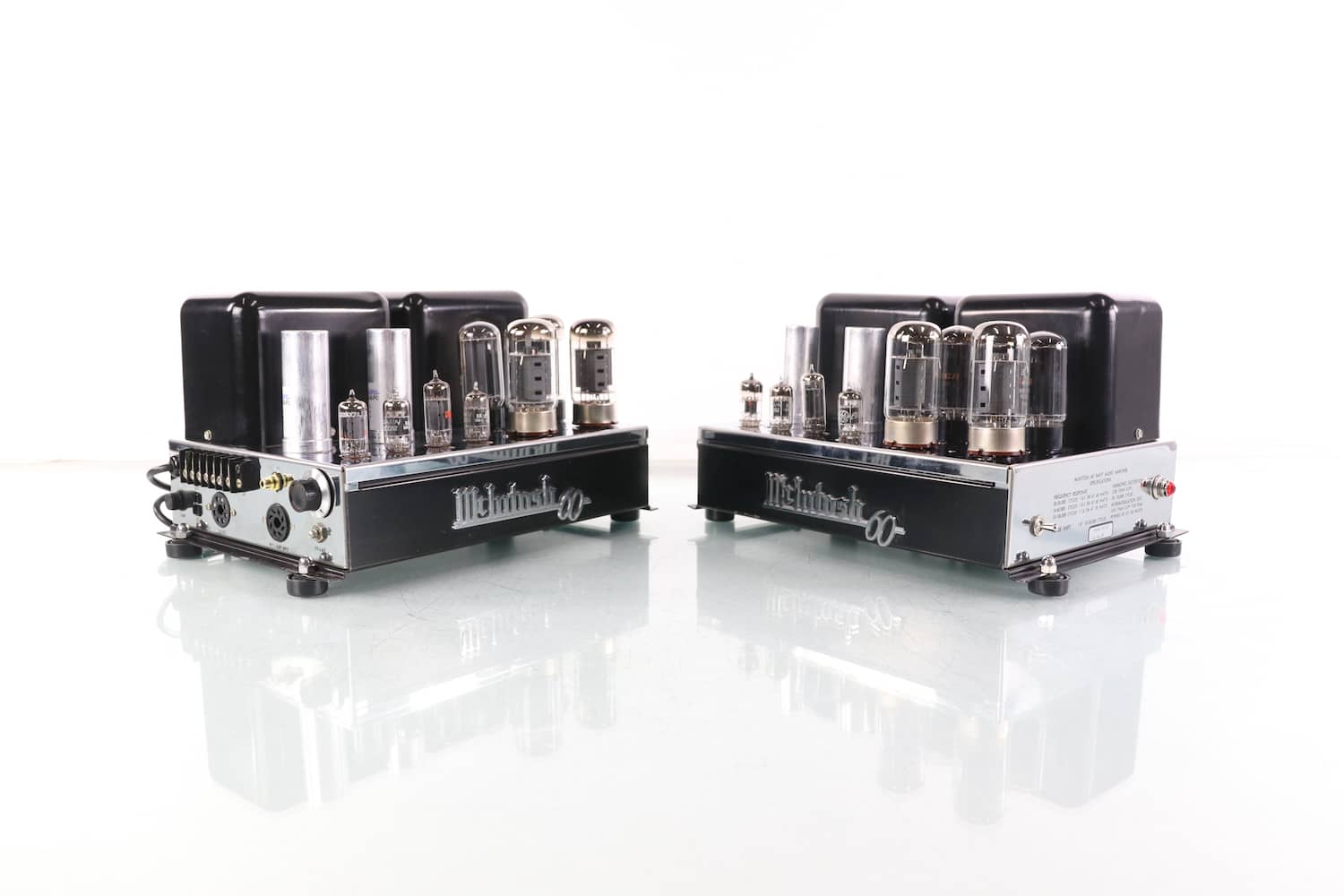